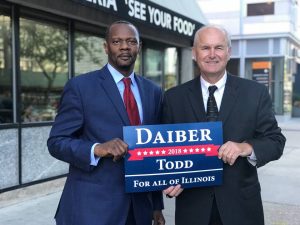 In a bid to build broad-based support for his campaign for Illinois governor, Madison County Democrat Bob Daiber has selected Chicago social worker and activist Jonathan W. Todd, as his running mate.

Daiber, currently the Madison County Regional Superintendent of Schools, believes the West Side Chicagoan can help him win the March 20, 2018 Democratic gubernatorial primary with a combination of support in the Windy City and Metro-East.

Daiber is among six Democrats who have filed with the Illinois State Board of Elections to run for their party’s nomination for governor in next year’s primary —  all but Daiber from the Chicago area.

If elected, Dabier would become the first Illinois governor to be elected from downstate in more than 100 years. A primary win would make him the first Democratic gubernatorial nominee from downstate since Glenn Poshard in 1998.

Although he has never held public office, Todd has long been active in Democratic politics as a community organizer, campaign volunteer, and political strategist, Daiber noted in announcing his running mate with an Oct. 17 appearance in Chicago’s Hyde Park.

He has served in senior positions with the Bernie Sanders for President organization, as well as the campaigns of municipal and congressional candidates, Daiber said.

He said Todd was selected from “a long list” of potential candidates for lieutenant governor because of his “understanding of government to help solve social problems.”

“Jonathan Todd is a good choice (for lieutenant governor) because of his working knowledge,” Daiber said in a prepared statement. “Jonathan has a background to help lead the charge to end violence in Chicago and around the state. I feel very good that Jonathan has worked with the Department of Children and Family Services and the Department of Human Services.”

Todd, 49, has for 13 years been a social worker with the Association House of Chicago, which provides services for the severely mentally ill.  He holds a bachelor of science degree in sociology from Roosevelt University and has more than 20 years of experience in social work.

“Jonathan is best-known as a friend to the common man, a voice for the voiceless and an adviser to those who seek counsel,” Daiber said.

Todd lives with his wife and 4-year-old daughter in Chicago.

“I am excited to join Bob Daiber in this gubernatorial race because Bob has an extensive background in public service and education,” Todd said. “I began to follow Bob in his campaign last spring and I have been impressed with his knowledge and detailed answers. We will be a good team because we believe in grassroots campaigning.”

Before serving as the Madison County regional superintendent of schools, Daiber, 60, taught at Triad High School for 28 years, served as a Marine village trustee and township supervisor and was three times elected to the Madison County Board in 2002. He resides with his wife in Edwardsville.

Daiber is the last of the active Democratic candidates for governor to select a running mate.

Chicago venture capitalist J.B. Pritzker, considered by many the leader in the Democratic gubernatorial primary field, has picked state Rep. Juliana Stratton as his candidate for lieutenant governor.

Although suburban Chicago businessman Alexander Paterakis has filed with the State Board of Elections to run for governor, he appears to have now ceased his campaign and has not declared a running mate.

In Illinois candidates for governor must declare a running mate in order to collect signatures on nominating petitions and secure a place on the ballot.