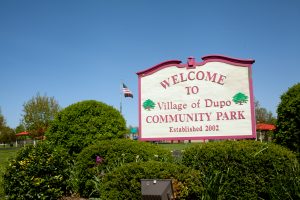 : The new business park in Dupo is part of the region’s top priority infrastructure projects that got a boost from the $23.5 billion Rebuild Illinois program and the Illinois Department of Transportation’s latest Multi-Year Improvement Program. (Photo courtesy of village of Dupo)

More than a third of the 20 major infrastructure initiatives, most the critical to establishing Greater St. Louis area as the “epicenter of American logistics,” have officially entered the construction phase, according to the St. Louis Regional Freightway’s new 2020 Priority Projects roster.

That includes the region’s overall top infrastructure priority: replacement of the Merchants Railway Bridge across the Mississippi River, according to the agency.

Also entering the construction phase are three of the region’s other highest priority projects:

Together, if completed, the 20 priority road and bridge projects would spur development of freight-related facilities across a seven-county area, including: the massive Discovery Business Park in Dupo, a similar new industrial park along the East St. Louis riverfront, a “Cargo City” freight hub at St. Louis Lambert International Airport and up to three new river ports around the City of St. Louis.

The St. Louis Freightway is a division of the Bi-State Development Agency, established to develop the multimodal freight industry in the Gateway City and surrounding area. The agency’s Freight Development Committee issued its first infrastructure priorities list last year.

Many of the region’s top priority infrastructure projects got a boost under $23.5 billion Rebuild Illinois program and the Illinois Department of Transportation’s latest Multi-Year Improvement Program, announced Oct. 21 by Gov. J.B. Pritzker.

However, several of the eight projects, listed as under- or ready-for construction on the priorities roster, actually are not yet fully funded, supporting documents note.

And the other 12 remain in the conceptual, planning, or design phases.

Ranking road and bridge projects in the form of a top 20 list is a somewhat novel approach, according to Mike McCarthy, chairman of the St. Louis Regional Freightway’s Freight Development Committee.

However, it can be effective in drawing attention to important projects which might otherwise be overlooked, he says.

For example, the Dupo I-255 interchange was elevated to highest priority status this year; due to increasing activity at the village’s Union Pacific Intermodal Yard.

Map of the proposed Interstate 255 interchange in Dupo. (Courtesy of village of DuPo)

The new $59 million interchange, along with nearby roadway improvements, will smooth traffic flow to the railyard and spur development of an adjacent Discovery Business Park, according to Freightway documents.

“From an economic perspective, this project is a unique situation in the St. Louis region that will provide a competitive advantage to value-added rail freight movement and business development opportunities,” according to a detailed version of the Freightway priorities list.

When completed the business park will have an estimated 22 million square feet of building space on an estimated 1,840 acres.

“The surrounding development is estimated to bring thousands of jobs to the area as the project progresses,” the Freightways document continues.

The new interstate exchange will be a diverging diamond interchange with a system of connecting roads to serve the new industrial area.

Future improvements along Davis Street Ferry Road will include a bridge or similar “grade-separated structure” crossing five rail tracks at the southern end of the intermodal yard, and relocation of Coulter Road to provide a better connection between Davis Street Ferry Road and Carondelet Road, according to Freightway documents.

Though not one of the region’s most prominent landmarks, the Dupo Union Pacific railyard is already one of its largest intermodal assets; with solid potential for growth, undeveloped land nearby and projected increases in fright volume, the Freightway report notes.

A second I-255 interchange to serve the railyard – this one at Ramsey Road near Fish Lake — remains in the planning stage.

The status of other highest priority projects is summarized as following in the St. Louis Frieghtway report.

Merchants Bridge Replacement — Construction began earlier this year and is expected to be completed  in 2022. The Terminal Railroad Association of St. Louis (TRRA), which owns the bridge, has announced it will cover the $222 million cost of the replacement; after being turned down for federal funding last year.

(Listed with the Merchants Bridge replacement, in Frieghtway planning documents, is the $9 million Union Pacific Railroad Lenox Tower Replacement and Track Realignment in Mitchell, which, despite partial funding, is slated for completion next year.)

Interstate 270 — The $1.2 billion overhaul of I-270, from Interstate 70 in St. Louis County to Illinois Route 157, includes the $22.6 million replacement of the Chain of Rocks Bridge and the rebuilding of all major intersections with Illinois state highways. However, funded has not yet been formally allocated for work east of Illinois Route 203.

Illinois 3 Connector –The two-phase access improvements project involves construction of a new 2.1-mile connector from River Park Drive in East St. Louis to Monsanto Avenue in Sauget, as well as a diversion bypass loop at Falling Springs Road and a bridge over the Alton & Southern Railroad between Monsanto and Queeny avenues. St. Louis Freightway staff are attempting to determine if the second –until-recently-unfunded – phase, is fully funded under the Rebuild Illinois program.

St. Louis North Riverfront Commerce Corridor Improvements – Relocation of the Interstate 70 westbound off-ramp to North Broadway is already complete. Improvement are now planned on nearby Riverview Drive and Hall Street and to improve freight traffic to the area truck terminals — and hinder legendary late-night street racing in the area.

Interstate 70 Improvements from Warrenton, Mo, to Stan Musial Veterans Memorial Bridge – With General Motors announcing a $1.2 billion renovation of its Wentzville, MO, pickup and van assembly plant, a special Freightway committee has been formed to plan 40 miles of improvement of improvements east from Wentzville to the St. Louis Riverfront, as well as expansion of the interstate to six lanes from Wentzville to Warrenton.

The complete report can be accessed at https://www.thefreightway.com/