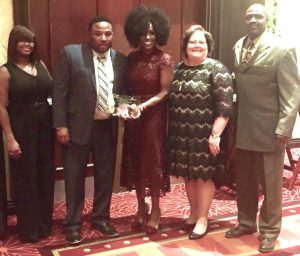 The Illinois State Board of Education (ISBE) is honoring the East St. Louis School District 189 Office of School Turnaround (OST) for implementation of a state-of-the-art, data-driven, academic improvement program in, what has often been called, one of the nation’s most troubled school systems.

District 189 Deputy Superintendent of Achievement and Administration Devon Horton and four fellow OST leaders were presented an ISBE Award of Excellence during the state school board’s annual “Those Who Excel” banquet in Normal, Oct. 28.

As part of the school districts MIRACLES Turnaround Strategy, the team has implemented a district-wide data dashboard platform (known as “Domo”) and the nationally recognized Academic Excellence Indicator System (AEIS) to track improvement in student academic outcomes and the overall “climate” at each district school, according to district Director of Strategic Partnerships Sydney Stigge-Kaufman

Just seven years ago, in 2010, the ISBE took control of the East St. Louis schools for poor academic performance.  It was only the second such school takeover in Illinois history. In addition to academic achievement problems, the district spent years on the ISBE’s financial watch lists.

Although the state initially established a transition officer in the district to implement reforms, District 189 Superintendent Arthur Culver, who took over as the district’s top administrator in 2011, convinced state officials to allow a team approach, establishing the district’s Office of Transition in 2015 and bringing in Horton to run it.

An 18-year classroom teacher, Horton came to East St. Louis after 14 years with the Chicago Public Schools for 14 years, with a passion for reform and expertise in developing accountability systems educational institutions. Some of his strengths include concentrations on performance management and real-time data use to improve instructional practices and administrative decisions, Culver said.

“I charged Deputy Superintendent Devon Horton with developing a system for managing and monitoring progress in key areas of importance across the building and district level,” said Culver. “(This) is systematically changing our culture to one that values the use of data to drive instruction and that values coaching and public practice.

Based on the data, the team provides intensive support to building administrators and a framework by which they can lead their staff in producing improvements, Culver said.

So far, the turnaround program appears to be working, he adds.

Administrators readily admit that District 189’s problems are far from completely solved.  The district continues to operate under terms of a 2013 consent decree with the ISBE.  Overall, standardized test score and other academic indicators remain far below state and national averages.

However, district staff and administrators are “elated that the Illinois State Board of Education is recognizing the profound impact of our District 189 Office of School Turnaround,” said Stigge-Kaufman said; adding that “Our district’s motto for this year is ‘Committed to Excellence.’”

“We believe that students can be successful in a rigorous academic program,” said Culver. “Their zip code will not determine their destiny.”