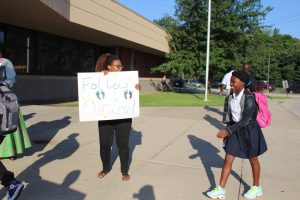 Parents and staff at Gordon Bush Elementary School welcome students on the first day of school this year. The East St. Louis school has gone from the bottom 5 percent of all public schools in the state in 2016 to being ranked “commendable” — the second-highest ranking by the Illinois State Board of Education. (District 189 photo)

Three years ago, Brittany Green walked into one of the lowest-performing schools in the state where there were more students suspended than attaining state education goals.

Green observed and built a team at Gordon Bush Elementary School in East St. Louis, with the support of a $7 million grant, to turn the school around in five years.

She is two years ahead of schedule.

Gordon Bush has gone from a school in the bottom 5 percent of all public schools in the state in 2016 to ranked as “commendable” — the second-highest ranking — by the Illinois State Board of Education.

Green set out to improve the instructional climate and culture, parental involvement, and safety at the school.

“We had the highest suspension rate in the district (East St. Louis School District 189) and one of the highest in the state,” Green said. “If they aren’t here, we are not able to educate them. If they do not feel safe, they can’t learn.”

Green tackled teacher training, instruction and curriculum. Only 9 percent of students were attaining state education goals. That has improved by 54 percent.

“There were a lot of changes,” Green said. “Early on, I had planning meetings and conversations with teachers and parents. I got them to buy into the mission vision. I wanted them to feel comfortable expressing their concerns.”

Green still has another rung to go on the ladder to get Gordon Bush to the State Board’s top rank — “exemplary.”

“We are shooting for next year, but we gave ourselves two years. We still need to improve attendance,” Green said. “We have had a lot of growth, but we still have some chronic truants. We need to put the parents in the fold. Some parents may not bring their child to school because they don’t have a clean uniform for him or her. We have uniforms here. It is important to get them here.”

A total of 160 schools in the state — nearly half of them in Chicago — find themselves in the same position Gordon Bush Elementary School was three years ago — at the bottom of performance rankings.

To be classified as “lowest-performing” by the State Board of Education, the all-students index score must be below 35.09 for grade schools and 8.93 for high schools on the state’s standardized test.

Schools designated as “underperforming” — the State Board’s second-lowest ranking — have the index score of one of more student groups below 35.09 for grade schools and 8.93 for high schools.

Schools ranked as “lowest-performing” and “underperforming” are given additional resources by the state and put on a four-year improvement plan.

A total of 386 schools in the state were labeled “underperforming.”

The breakdown of area schools labeled “lowest-performing” or “underperforming” (by county) is: