Chain of Rocks bridge that spanned the Missouri River from western Madison County into St. Louis is one of the bridges that is being replaced by a cooperative effort with Illinois and Missouri agencies. (Photo courtesy of IDOT)

To counter that, the agency is seeking input on a proposed new EWG Public Involvement Plan, which officials hope will create “a culture of robust civic engagement” in regional planning.

An open house-style meeting on the new public involvement plan was held Tuesday, April 23, at the Illinois Department of Transportation District 8 headquarters in Collinsville.

The EWG was established in 1965 to coordinate planning, on a voluntary basis, for major transportation projects that span or affect more than one governmental jurisdiction. It covers the City of St. Louis, Franklin County, Jefferson County, St. Charles County, and St. Louis County in Missouri, as well as Madison County, Monroe County, and St. Clair County in Illinois.

It is one of numerous regional councils of government (COGs) established around the nation in the 1960s and ‘70s, as federal grant funding became more and more importantly to local and regional highway projects — and the federal government increasingly required coordinated planning for such grants.

As federal grant programs proliferated, the EWG expanded its scope. In addition to planning stretches of interstates and major state highways, the EWG now works on a wide range of street, road and bridge projects — as well as other transportation initiatives from airports to light rail and from bike and pedestrian trails to everyday sidewalks.

“If you have a transportation or environmental issue, let us know,” Johnson said. “There is probably money available to address it.” 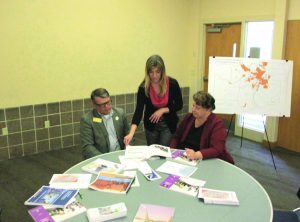 The EWG Board of Directors, with 24 voting members and 5 non-voting members, is a virtual Who’s Who of St. Louis-area government and the only official forum of its type in the area.

The board’s executive committee consists of the chief elected officials from the City of St. Louis and seven counties in the St. Louis region.

The other 16 voting members are selected from among area mayors, county board members, officers of regional governmental organizations such as the Municipal League of Metropolitan St. Louis, and “regional citizens,” according to the EWG website.

Priority planning projects established annually in a Unified Planning Work Program, approved by the EWG board each April. Priorities for planning and funding are established in a set of EWG 10 Guiding Principles

Development of I-255 from Monroe County to Madison County is to date probably the largest Metro East project in which EWG has had a role.

Currently the biggest project on the agency’s radar is the rebuilding of I-270 — including the replacement of Missouri River bridges —from western Madison County through North St. Louis County.

The EWG’s Connected 2045 document provides a catalog of virtually transportation infrastructure projects planned in the region over the next 26 years. 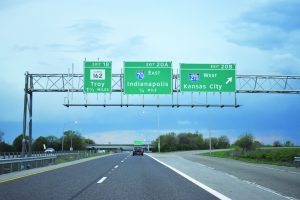 :   Interstate 270 leads west from I-55 near Troy to the Chain of Rocks Bridge to northern St. Louis. (Photo courtesy of Interstateguide.com)

Present EWG efforts to keep the public apprised its myriad projects range from citizen’s committees to conventional public relations tools such as newsletters and social media.

In many cases, EWG communications efforts have centered largely around making its vast network of local public officials aware of programs and funding opportunities that might benefit their jurisdictions.

Public outreach efforts have often involved open houses or similar public meetings designed to allow the public to look over and comment on plans for specific projects.

In many cases, EWG staff relies largely on its network of public officials to bring emerging issues around the region to the council’s attention.

Traditional press releases are used mostly for major events such as the EWG Annual Meeting and Outstanding Government Achievement Awards each fall.

Under the new public involvement plan: 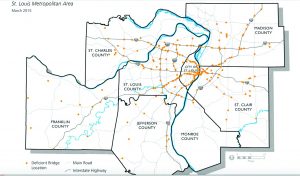 The first of the EWG’s two open houses on its draft public involvement plan, in St. Louis County April 16, drew only a half-dozen attendees.

However, most in attendance appeared to agree that greater public involvement in regional public planning is needed.

Among them: Jefferson County, Mo. Council members Mary Grace Lewandowski and Charles Groetek. Lewandowski noted on a sign-in sheet that she was “concerned.”  They noted that many parts of their fast-growing but still largely rural county still have no Internet access. That rendering websites and social media ineffective as an outreach tool in areas where some of the most pressing regional planning issues are likely to arise over the coming years.

Johnson speculated that may also be true in areas of Metro East; especially Monroe County.

Additional information on the draft Public Involvement Plan can be found at https://www.ewgateway.org/community-planning.

The East-West Gateway Council of Governments is accepting public input on its draft public involvement plan through May 10.

EWG staff hopes to submit the draft plan, with all comments, to the agency’ board of directors for approval shortly after the close of the comment period.

Comment can be submitted online at communityengagement@ewgateway.org, by using “Comments on Draft Public Involvement Plan” in the subject window.

Comments can also be submitted by mail to:

Questions about the Public Involvement Plan can be addressed to Roz Rodgers at 314-421-4220 or Roz.Rodgers@ewgateway.org.