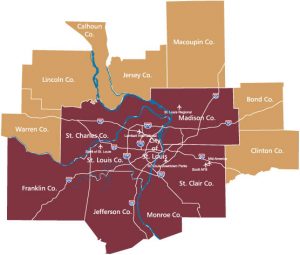 The eight counties of the St. Louis region.  Counties on the Missouri side have seen a population increase. (Courtesy of East-West Gateway)

The population of Metro East continues to slowly-but-steadily decrease, according to 2018 population estimates, released April 18 by the U.S. Census Bureau.

Fortunately, despite severe population loss in the City of St. Louis, the overall population of the St. Louis region on the Missouri side continues to increase.

The greater St. Louis area is generally considered to consist of the City of St. Louis and seven surrounding counties: St. Louis, St. Charles, Jefferson and Franklin counties in Missouri; along with the Metro East counties of Madison, St. Clair and Monroe in Illinois.

While the Census Bureau only undertakes a full headcount of the U.S. every 10 years, the bureau each spring issues population estimations; reflecting what officials believe were the population levels across the nation on July 1 of the previous year.

The next full census will occur in 2020. The bureau issued its most recent estimates on April 18; providing population estimates for July 1, 2018. 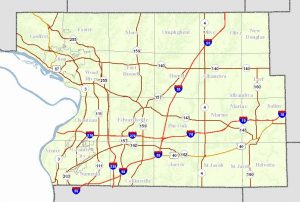 Madison County has the largest population of the Illinois counties that make up the St. Louis region. (Courtesy of Madison County) 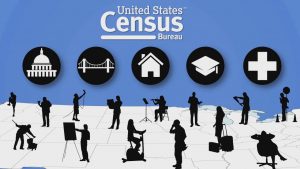 The country is preparing for the nationwide census next year. The census is required by law to be held every 10 years.

The population of St. Louis County rose last year following two years of losses, according to the Census Bureau. The county’s population stood at 996,645 in mid-2018; up 297 from 996,648 a year earlier, according to estimates.

Census estimates for outer Illinois counties, on the eastern edge of the St. Louis region, suggest populations in those rural areas may be stabilizing.