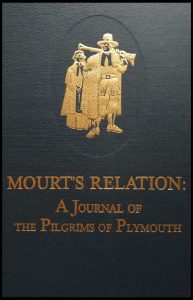 “Mort’s Relation,” published in 1622 by George Mourton, was was rediscovered in the 1840s and excerpts from the text were used to create what became the story or legend of the “first” Thanksgiving.

As Thanksgiving nears, two faculty members of the Southern Illinois University Edwardsville Department of Historical Studies and Native American Studies, provided an opportunity to discuss some of the historical facts surrounding the holiday.

Robert Paulett, Ph.D., associate professor; and Rowena McClinton, professor, served as facilitators of the topic, “Understanding Thanksgiving and its Connection to Native American History,” on Friday, Nov. 15 in the Morris University Center, Center for Student Diversity and Inclusion (CSDI).

“We want to provide a brief introduction to the history of Thanksgiving and the origins of the Pilgrim story we all learned, which became defined over the next century into the holiday we know today,” said Paulett.

The discussion was based on the excerpts from the publication known as “Mort’s Relation,” published in 1622 by George Mourton and written by Edward Winslow and William Bradford. The writing was made accessible in a modern, online edition by Caleb Johnson of the General Society of Mayflower Descendants.

“In its original form, this was a pretty typical document of exploration – a description of exploration, settlement, violence, diplomacy and outright theft in some places,” said Paulett. “But at the end, there is a brief paragraph describing an English harvest feast that played host to their new Wampanoag trading partners.

When this 1622 document was rediscovered in the 1840s, Americans seized on this brief paragraph, ignored the rest, and began to celebrate this myth and turned it into the national idea of Thanksgiving.”

“America in the 1800-1900s was trying to define itself as this generous, benevolent, Christian empire on the world stage. Look at our generosity, peacefulness, benevolence. That becomes the 20th century Thanksgiving we’ve all grown up with.”

“We all have a lot more to learn about Thanksgiving and about Native American experiences in our history,” said Paul Rose, PhD, professor of psychology, and associate dean of the School of Education, Health and Human Behavior. “Most of us have missed out on a lot of the facts of American history.”

After the discussion, senior psychology major Angel Williams said she was glad to have learned a little more on the subject. “The subject matter wasn’t new,” she added. “But it was more in depth than what I learned in high school. In high school, we just learned about the good things. Hearing it now, does give me bad vibes, but it’s still a holiday that most people will celebrate.”

“The discussion refreshed some of the subject matter for me. I had studied some Native American history before coming to this discussion,” said Kelly Moroney, New Students Transition coordinator. “It didn’t change my view of the holiday. I have mixed feelings. I like the idea of a peaceful union, but it is not an accurate representation of the history between Native American people and colonizers. I do like how the holiday is hallmarked as a time for family, because family is important to me.”