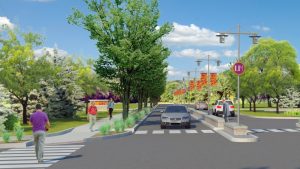 A new,  live entertainment facility, designed to attract crowds from across Southern Illinois and the greater St. Louis area, could ultimately prove the highest-profile component of an emerging new program to reinforce the image of Fairview Heights as a major commercial and residential center.

However, the planned rebranding of its Lincoln Trail retail district as a contemporary shopping area will also be important, according to city officials.

To rekindle the Fairview Heights residential housing market, officials have in the works a new community center, as well as biking trails and other features designed to highlight the city’s unique rural-urban atmosphere.

On the city’s western edge, a new breed of mixed-use residential development is foreseen around the Fairview Heights Metro Station.

Nearby, to broaden the town’s employment base, officials plan a new industrial park, off  Illinoi Route 157 In the northwest corner of the city near Caseyville.

Strategically located at the matrix of Interstate 64, Illinois Route 159 and U.S. Route 50 (Lincoln Trail), Fairview Heights has been widely known as the “Retail Hub of Southern Illinois,” since the 1974 opening of St. Clair Square; one of the nation’s first enclosed shopping malls — with a quartet of anchor department stores (Macy’s, Dillard’s, J.C. Penney, and Sears). 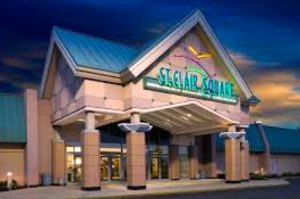 Residential subdivisions also flourished; bolstered in part by Fairview Heights’ long-standing aversion to the levying of local property taxes. The city’s extraordinary retail base has provided the unique opportunity to fund municipal operations largely through sales and use tax revenues.

However, that has become harder to do as competition has escalated from online retailers as well as from new shopping centers in O’Fallon, Swansea and Belleville.  Over the past 10 years, St. Clair Square and nearby shopping complexes have maintained occupancy rates but lost some market share to the aforementioned competitive sources, and today face the need, like many shopping areas nationwide to replace Toys ‘R’ Us.

Chattanooga TN-based CBL Properties, the owner and manager of St. Clair Square, believes the mall is well-positioned to weather the current changes in the retail industry.  The Fairview Heights shopping center continues to be among their most successful properties nationwide. Announcements of new mall tenants are promised over the coming weeks.

To provide similar long-term stability for the neighboring shopping centers, Fairview Heights officials have embarked upon a comprehensive public-private effort to maintain the area as a super-regional shopping destination.

A system of attractive, uniform “streetscape” improvements —complete with signage, banners, sidewalks, trees and other amenities — is to extend along throughout the revitalizing centers across Ill Rt. 159 from St. Clair Square. New development standards along Lincoln Trail will require property owners to provide uniform public spaces, benches, and other improvements for an enhanced shopping experience. Building exteriors, similarly, will be required to meet standards for consistency of design.

Revitalizing the Fairview Heights Plaza, along Ludwig Drive on the northwest corner of the city’s I-64-Ill.159 interchange, could involve development of a new entertainment complex, city officials say.

The proposal comes in response to criticism that Fairview Heights is “over-retailed,” says Paul Ellis, the city’s director of economic development. “It would add to the retail mix and generate additional traffic. Both will be helpful.”

The city is hoping to find new tenants for several buildings in the Fairview Heights Plaza, including the former Joe’s Crab Shack building.

As part of the Fairview Height Plaza revitalization, city officials also hope to develop a tract of land, presently in agricultural use, that lies just to the north beyond a railroad line.  However, that will require remediation of undermining, they acknowledge.

The OneSTL plan centers on redeveloping properties around public transit stations as residential and retail complexes. Fairview Heights planners want the complex around their MetroLink station, at the intersection of Ill. 161 and St. Clair Ave., to include residences for older adults.

Redevelopment along Illinois Route 161 would also include development of an industrial park surrounding the Arrowhead Building Supply store.

Key to the redevelopment along Hwy. 161 would be the use of enterprise zone and TIF incentives to offset high property tax rates imposed in the westernmost section of Fairview Heights by some East St. Louis area taxing entities, planning documents note.