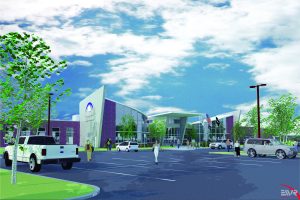 Artist’s rendering of The Rec in operation. (Photo courtesy of City of Fairview Heights)

The city long known as the “Shopping Hub of Southwestern Illinois” is opening a $21 million recreation complex that officials hope will provide not only an attractive amenity for residents, but a fun and fitness mecca for surrounding communities.

Southern Illinois’ first Clip ‘n Climb climbing wall, a state-of-the-art fitness center, and a veritable indoor water part are among the attractions at The Rec Complex of Fairview Heights, on the city’s municipal government center grounds at 10025 Bunkum Road.

The Rec is destined to become” the community’s first full spectrum recreational complex and all-in-one destination,” according to the center’s website.

Construction was completed on-time and under budget, officials say.

The cost of the new center is covered mostly by a $18.5 million bond issue; paid with revenues from the city’s food-and-beverage tax.

The Rec will be open this week for sign-up and center previews.

For non-residents, memberships are $5 more per month, with an $80 registration fee.

However, enrollment fee will be waived through May 31, city officials say.

Military personnel, first responders and persons with disabilities are offered a 10-percent discount. 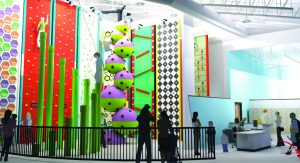 A feasibility study, conducted prior to construction, concluded the center is likely to attract users from many nearby communities.

The new recreation center is situated on the municipal complex grounds to allow for future expansion, they note.

Clip ‘n Climb centers are described as “the hottest action attraction to come out of New Zealand since the Bungy Jump,” by franchiser Entre-Prises, of Saint Vincent de Mercuze, France.

The centers offer more than 40 wall climbing challenges, from simple climbing for enjoyment or fitness to a variety of climbing-based games. The climbing wall is appropriate for climber age 4 and up, according to the company.

While designed to provide a family-friendly recreational activity, the centers also represent part of an international movement to establish wall climbing as a sport, according to the company.

About 250 Clip ‘n Climb centers have been opened on five continents, since the company’s wall climbing system was developed in 2005. The nearest is in the St. Louis County community of Webster Groves.

In addition to its array of games and challenges, centers feature a proprietary harnessing system designed to limit (or “belay,” in climbing parlance) the distance a climber can fall. The apparatus includes features to ensure climbers are locked into the harnesses before ascending, the company says.

The company provides training for all staff in the climbing centers.

Elsewhere around the Rec, an aquatics center features a four-lane, zero entry swimming pool with certified lifeguards, waterslide, splash pad, water volleyball and basketball equipment, and a special “lazy river” section, according to city officials.  Water exercise classes and swimming lessons will be offered. (Zero entry pools have one or more sides that gradually slope to transition from land to water.)

A full-sized basketball court can be converted to volleyball or pickleball courts. A game room offers ping-pong and pool.

Outside the building are a soccer field, an additional walking and running track, and a dog park. Grant School District 110 students will use the soccer field and outdoor tracks under an agreement with the city.

Party and meeting rooms at the center can accommodate up to 100.

Climbing and pool birthday parties will be a specialty with the center providing a party attendant, pizza, drinks, a gift for the birthday boy or girl and each guest, digital and printed invitations, party setup and cleanup.

A Lil RECers Zone child care center will be available for children ages 1 to 10.

Security will be a priority at the Rec with video monitoring and security personnel throughout the building, city officials say.

Children under 16 must be accompanied by a parent or guardian.