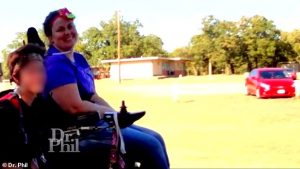 Sarah Delashmit of Highland has been charged with falsely claiming she had been diagnosed with muscular dystrophy and spinal muscular atrophy in order to attend a Texas camp serving individuals with disabilities. (“Dr. Phil” photo)

A Highland woman has been charged with falsely claiming she had diseases for her own financial gain.

According to an eight-count indictment, returned by a federal grand jury for the Southern District of Illinois, Delashmit falsely claimed she was diagnosed with muscular dystrophy and spinal muscular atrophy to attend Camp Summit, a Texas nonprofit camp serving individuals with disabilities.

The indictment further alleges that while at Camp Summit, Delashmit impersonated an individual with disabilities by confining herself to a wheelchair and pretending to need assistance with most daily activities, such as getting dressed and bathing, despite being fully able to walk and care for herself.

In addition, the indictment alleges that Delashmit falsely claimed she was a breast cancer survivor
to go on a trip and receive donated items through the Young Survival Coalition, a New York-based nonprofit organization serving young adults who have been diagnosed with cancer.

Delashmit is also accused of making false statements to a credit card company and an internet retailer to obtain a triathlon bicycle valued at $4,499 without paying for it.

The cover of Delashmit’s Facebook page is a quote from St. Francis of Assisi, “Start out by doing what’s necessary; then do what’s possible; and suddenly you are doing the impossible.”

She appeared on an episode of “Dr. Phil” in April, where she admitted to making up the diseases.

“I have a lying addiction,” Delashmit said during the show. “The last eight years, I’ve done all kinds of extreme measures to make my life seem more exciting.”
Delashmit told the audience of the show, hosted by Phil McGraw, that she told her first “big” lie in her mid-20s and has continued to deceive people. She admitted she’s lied about having cancer, that she was married with children and that she had muscular dystrophy, even buying and using a wheelchair. She said she changed the way she looked and posted pictures in different situations to keep up the charade.
“I go into a relationship with a friend on the basis of lies every single time,” Delashmit said. “By lying, I was getting attention.”
Delashmit is due in federal court for her initial appearance at 10 a.m. March 24. A trial
date has not been set.

If convicted, Delashmit faces up to 20 years in prison on each of the mail fraud and wire fraud charges. The aggravated identity theft charges each carry a mandatory sentence of two years’ imprisonment.

The investigation was conducted by the FBI and Postal Inspection Service.