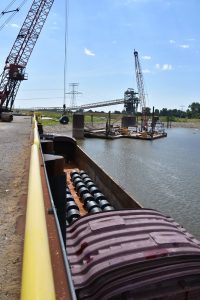 An important upgrade was completed in November at Granite City Harbor, a full-service intermodal port. It was among more than 20 freight projects undergoing improvements across the state. (Photo courtesy of America’s Central Port)

A million-dollar update of the Granite City Harbor has become the first project completed under an Illinois freight infrastructure development program.

The America’s Central Port District’s Granite City Harbor Dock Improvements project was completed in November and the harbor is fully operational, according to Alex Burkart, the port district’s director of marketing

The Granite City projects were among 23 authorized in 2018 under the Illinois Department of Transportation’s Competitive Freight Program.

Together the projects are designed to implement the 2017 Illinois Freight Plan. The plan was developed to strengthen the Prairie State’s status as a national and international freight hub.

The Bi-State Development Agency sees the six freight projects, co-funded by IDOT in Metro East, as critical steps in its St. Louis Freightway program to promote the Gateway region as an intermodal shipping center.

More than 40 Illinois communities applied for the IDOT competitive grant program; with eight of the eventual grant awardees in the Chicago area and 15 across the rest of the state.

The concentration of projects in Metro East prompted then-Illinois Gov. Bruce Rauner to formally announce the grants at a ceremony on the East St. Louis riverfront.

The improvements have increased the port’s barge landing capacity by 60 percent, according to district officials.

Concrete on dock surface is thicker than at most airports, so it can withstand heavy use by large trucks as well as the pounding inherent in freight transfers.

Although there had been some existing rail lines along the harbor, they were old and no longer suitable for use, Burkart noted.

SCF, the international transportation and logistics firm that manages all fright transfers at America’s Central Port, has purchased a new state-of-the art crane for the facility.

Roadway improvements at a nearby entrance to the port complex are designed to prevent traffic congestion on Illinois Route 3, as truck volume increases.

Construction bids for the port work were let in June of last year.  The project was already 75 percent complete by October.

The Illinois Department of Transportation has initiated a preliminary engineering and environmental study for replacement of the bridge that carries IL Route 111 over Interstate 64 in Washington Park. The existing bridge was built in 1973. (Photo courtesy of IDOT)

Freight operations at America’s Central Port were never shut down during construction, Burkhardt emphasizes. Barge traffic that would normally be handled at the Granite City harbor was simply transferred to the port facility’s other harbor, he said.

Roadwork bids were let in September with work expected to begin this spring.

During a national transportation planning conference in Atlanta, Holly Ostdick, a senior planner with the State of Illinois, and Michael Vanderhoof, IDOT Planning Services Section Chief, predicted the Granite City harbor improvements would be the Illinois Fright Plan projects to be completed.

The latest round of semi-annual progress reports on the various projects were due from local sponsors on Jan. 1.

Illinois Department of Transportation has tagged the Interstate 270 bridge across the Mississippi River for major work and replacement. (Photo courtesy of IDOT)

A planned rebuilding of the I-270 interchange at Illinois Route 111 is in project development phase; entailing final engineering, land acquisition and permitting, Vanderhoof told the Chronicle.

The new Illinois Route 111 overpass will be part of the massive reconstruction of I-270, which will span most of Madison and St. Louis counties; taking most of the coming decade to complete.

When finished, the rebuilt interstate is become a key link in an emerging National Highway Freight Network system; planned by the USDOT.

The $19 million cost of the Illinois Route 111 interchange will be covered by $13.6 million in federal funds administered by IDOT, and $3.8 million in matching funds from the State of Illinois.

Not yet underway is long planned work on Illinois Route 3 to address traffic tie-ups at railroad track in the Village of Sauget.

Initial planning funds for a diversion loop and grade separation project were approved by IDOT in 2019.

However, Sauget officials requested IDOT scrap that project in favor of an alternative proposal involving existing roads through the village.

Village officials are now planning to bring in a consultant to reassess the situation.

Vanderhoof was reticent to suggest a new start date for the project but noted that such outside planning efforts, complete with a public involvement process, often take a couple of years.

The cost of the diversion loop and grade separation project was set at $2,757,600. Whatever form the project may ultimately take, the village has $1,103,040 is USDOT funds, administered through IDOT, and $1,654,560 in matching funds from the federal Interstate Commerce Commission (ICC) to help cover it.

Fully designed and now under construction is the Village of Cahokia’s long-sought reconstruction of its Cargill Elevator Road.  Bids were let April 26, 2019 and preliminary work began in October.

An indispensable link to Cargill’s Mississippi River grain terminal, the roadway’s pavement was washed out in 2008.

A temporary gravel surface has been in place now for more than a decade. Trucks represent 87 percent of the vehicles traversing the narrow roadway. Traffic is one lane in each direction.

Federal funding of just $800,000, administered through the IDOT Competitive Freight Program, has become the critical factor making the long-planned $3,225,000 road rebuild possible, according to Vanderhoof. Some $1.9 million in state and private funds had already been committed to the project.

Also underway is Bi-State Development’s reinstallation of the old M&O Railroad Junction in East St. Louis — once the point where the Illinois Central and GM&O southbound mainlines connected to the St. Louis Terminal Railroad Association’s East Side rail yards.

The original tracks were torn out years ago, Vanderhoof said. Bi-State now plans to install a new track on the existing grade. Bids were let in September. Work is getting underway as materials arrive at the site.