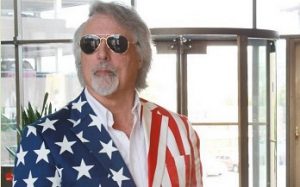 Can a radio talk show host known as “The Grim Reaper” and a band of mostly Republican Metro-East mavericks really hope to successfully challenge a well-established political power structure in one of the most Democratic counties in the nation?

That’s what Bob Romanik and his St. Clair County Freedom Coalition say they are trying to do in the Nov. 8 general election.

Both St. Clair County’s Democratic and Republican central committees fear they will.

Romanik  regularly assailing St. Clair County’s “culture of corruption” during often-raucous, weekday morning broadcasts on two of his Metro-East radio stations (KZQZ, 1430 AM and KQQZ, 1190 AM).

He has put up more than $2 million to fund the campaigns of Freedom Coalition candidates, including his own bid for the Illinois General Assembly.

In response, Democratic incumbents are mounting vigorous defenses. County Board Chairman Mark Kern last week launched an aggressive television advertising campaign.  Fearing adverse public opinion — spurred by Romanik’s broadcasts — might make it difficult to garner the 60 percent voter approval required for retention, three 20th Judicial Circuit Court judges have taken the unusual step of resigning from the bench and seeking election to the court as new candidates. They are hoping to win new terms with just a 50 percent vote.

The Freedom Coalition slate, all listed as Republicans on the November ballot, offers candidates for most St. Clair County offices, including: 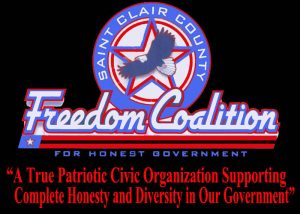 Romanik describes the Freedom Coalition as an efforts crossing “all political parties, all races, all genders, all lifestyles” to encourage better government.

Though listed as Republicans on the county’s November ballot, several coalition candidates — notably Officer and the Cooks — were formerly high profile Democrats.

“Vote the person, not the party,” is a recurring coalition theme.

Romanic and other coalition candidates cite controversial projects, such as MidAmerica Airport, and the decline of East St. Louis as evidence St. Clair County is run by a “political machine,” which allocates resources based on deal-making and cronyism.

A long-time East St. Louis homicide detective and former Washington Park Police chief, Romanik openly acknowledges he is a convicted felon who spent time in federal prison— he says, because he refused to provide information on fellow East St. Louis Police officers during a corruption investigation.

He reportedly amassed a personal fortune through ownership of Washington Park real estate occupied by gentlemen’s clubs. Romank or his son reportedly once operated one of the clubs. He has been censured by the county’s Republican central committee.

Charges of machine politics for years have been common in St. Clair County.

However, Romanik and his Freedom Coalition candidates are betting growth in Republican voter turnout in the central county precincts around Scott Air Force Base, combined with disaffection among voters in the western-county American Bottoms precincts, could power historic political change.

Nevertheless, guest appearances on Romanik’s radio programs by St. Louis Aldermanic President Lewis Reed, considered by many the city’s leading mayoral candidate in upcoming municipal elections, attests to the broadcasts’ influence on both sides of the Mississippi River. Reform-minded, Democratic East St. Mayor Emika Jackson-Hicks has recorded a broadcast statement of support for the coalition’s principles.