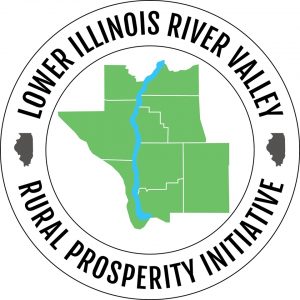 The LIRV-RPI “seeks to immediately leverage the capacity-building strength of local institutions to assist leaders in unleashing a wave of rural innovation and entrepreneurship across the Lower Illinois River Valley,” the group’s website states.

“LIRV-RPI through its partnering organizations (will) support local economic development strategies and local planning efforts in a manner that reveals the power of cooperation across communities and organizations, and the importance of collective impact, validated by proven metrics,” according to an Oct. 7 press release, announcing the official incorporation of the group.

The group has yet to announce specific projects, but lists as its key “Impact” objectives:

As strategic steps in achieving those objectives, the group plans to:

The initiative will initially focus on a nine-county corridor along the lower 80 miles of the Illinois River, encompassing: Brown, Cass, Pike, Morgan, Scott, Greene, Calhoun, Jersey, and Macoupin counties.

A second phase will eventually expand the initiative into Adams County on the north and a northeaster section of Madison County, a map on the website suggests.

Serving as interim executive director of the initiative is Patrick McGinnis, a founding partner and 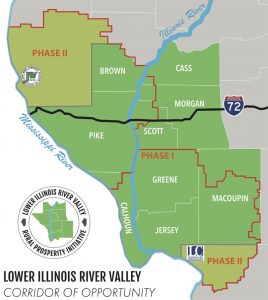 Over a 33-year career with the St. Louis District of the U.S. Army Corps of Engineers, McGinnis — whose family goes back five generations in the Illinois River Valley — worked on a range of water and conservation projects in Southwestern Illinois.

“Applying local capacity strategically and assembling the right mix of resources — human, institutional, and financial —will be crucial to driving real change,” said McGinnis. “The Lower Illinois River Valley is a rich corridor of natural and human capital and is ready for targeted investment and transformative change. We need change that preserves our natural and cultural heritage, while demonstrating a strong regional brand that our region is a great place to work, live, and play.”

The Lower Illinois River Basin is typical of population loss and economic decline seen across America, the LIRV-RPI notes in its press release.  However, organizers have been studying successful rural revitalization efforts across the nation and hope that efforts here could someday become a model for projects elsewhere.

“It’s going to take a collective effort to buck the trends for rural America. The valley is a great place to start,” McGinnis said.

The LIRV-RPI developed over the past two years as a small, ad hoc, working group, meeting bi-monthly by phone or in-person to discuss grassroots revitalization of Southwestern Illinois’ rural communities.

Central to the initiative will be diversifying the area’s economy beyond its traditional agricultural base, according to prominent Pike County farmer Phil Bradshaw, an LIRV-RPI director.

“Bulk agriculture commodities cannot and will not provide the jobs and the tax base to have viable thriving communities in the Lower Illinois River Valley,” said Bradshaw, a former chairman of United Soybean Board who, in the 1970s, was part of the first non-government national trade mission to China, as well as a rare USDA trade mission to Russia during the Cold War.

That diversification will require a cohesive effort, he emphasizes.

“Colleges, universities, banks, farm organizations, businesses, and government entities must work to broaden our economic base in the region.” Bradshaw said.

“The LIRV-RPI regional model of collaboration will provide entrepreneurs, local leaders, students, and residents access to educational resources, partnerships and networks essential for measurable economic impact within our communities,” said Jennifer Russell, a community and economic development educator with the University of Illinois Extension and another director of the initiative.

Fortunately, the Lower Illinois River Valley is considered a “resource rich area” by scientists and environmental experts because of its abundance of biological resources,” according to Alley Ringhausen, executive director of the Alton-based Great Rivers Land Trust.

“The confluence of two major rivers has resulted in an array of aquatic resources, wetlands, floodplains, forested bluffs, glades and rich soils. The valley is the perfect opportunity for a blend of conservation and recreational activities,” Ringhausen said.

Over the past 20 years, the land trust has been instrumental in preservation of scenic and ecologically valuable lands along the Great River Road between Alton and Pere Marquette State Park.

Over recent years the trust has expanded into Missouri and has now made the Lower Illinois River Valley a focus area.

“Farmers make up less than 2 percent of the population, but every Illinois farmer feeds approximately 155 people. The Pike-Scott Farm Bureau recognizes the importance of engaging everyone. We all need to pull in the same direction. Our collaboration with the Lower Illinois River Valley — Rural Prosperity Initiative gives producers in this region another valued partner and an opportunity to help build and demonstrate lasting solutions to rural Illinois’ most pressing challenges,” said Blake Roderick, executive director of Pike-Scott Farm Bureau.

HED:  Goals for the initiative

A set of “anchoring initiatives” selected by the LIRV-RPI working group include:

Since publicly announcing their effort, the LIRV-PRI has been fielding responses from interested parties as well as contacting organizations with a potential role in specific objectives or general operations, McGinnis said in an email to the Chronicle.

“One area we are keenly interested in is developing key performance indicators, measures, and metrics in general.  We feel strongly that producing measurable, impactful results that are trackable can bolster the confidence of our communities and potential investors,” McGinnis said.

The next LIRV-PRI working group meeting is set for early November.