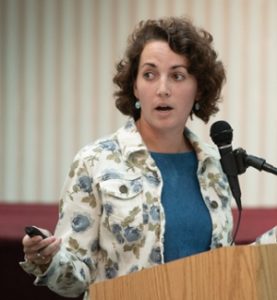 The Union of Concerned Scientists (UCS), along with other organizations, gathered on Aug. 27 at the Center for Spirituality and Sustainability on the campus of Southern Illinois University Edwardsville to inform the public about the threat of extreme heat, and talk about The Clean Energy Jobs Act (CEJA).

More than 50 people attended the meeting that focused, in part, on the UCS’s new report, “Killer Heat in the United States.” The report laid out a stark choice of whether to continue on the path of not reducing emissions, with devastatingly hot consequences, or begin now to reduce heat-trapping emissions.

“The Union of Concerned Scientists knew it was important to work with organizations on the ground in the Metro East region to discuss local climate and health impacts with the community, because this region faces disproportionate risks of both extreme heat and flooding,” said Meghan Hassett, UCS Midwest campaign coordinator. “Equitable renewable energy solutions like the Clean Energy Jobs Act must prioritize communities like ones across the Metro East, who are the most impacted. It starts with ensuring that people understand what is at stake, and what we can do to avoid the worst consequences of climate change. “

“Our ‘Killer Heat in the USA’ report showed that Alton was one of three cities in Illinois with a population over 50,000, that could face the highest frequency of days with a heat index of over 100 degrees Fahrenheit,” continued Hassett. “In addition, Madison County could face an average of 62 days per year with a heat index about 105 Fahrenheit, if we fail to reduce heat-trapping emissions.”

Amanda Pankau, energy campaign coordinator with Prairie Rivers Network and downstate grassroots leader with the Illinois Clean Jobs Coalition, added, “The Clean Energy Jobs Act recognizes that our growing clean energy economy is about more than fighting climate change. CEJA is about equitable access to public health, a cleaner environment, and quality jobs for economically disadvantaged communities, communities of color, as well as for workers and communities impacted by a decline in fossil fuel use.”

John Chick, principal scientist with the Illinois Natural History Survey and field station director for the Great Rivers Field Station. Chick’s main research activities focus on the ecology of large rivers, particularly the Mississippi and Illinois rivers. He shared about the flooding and temperature trends of the Mississippi River.

Mike Atty, executive director of the United Congregations of Metro East. Atty discussed his work with faith-based organizations on environmental justice and environmental racism issues in the Metro East area.

Scott Allen, environmental outreach coordinator with the Citizens Utility Board, a statewide, nonprofit utility watchdog. Allen discussed how existing energy efficient programs could be used to reduce electricity consumption, and how the Clean Energy Jobs Act will strengthen and expand those programs.

Specified throughout the two-hour meeting was the importance of the Clean Energy Jobs Act (Senate Bill 2132 and House Bill 3624).