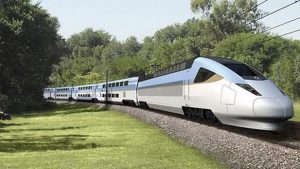 Development of the Illinois Department of Transportation’s (IDOT) new, $1.96 billion, Chicago-to-St. Louis, high-speed railroad line is proceeding on schedule, according to department spokespersons.  Bullet trains, reaching up to 110-mile-per-hour, are expected begin offering passenger service between the two cities as early as the late summer of 2017, department officials said at a public meeting in Alton last week.  Work on the high-speed rail corridor is expected to be completed no later than the end of 2017.

A component of the U.S. Department of Transportation’s planned, national High-Speed Intercity Passenger Rail (HSIPR) program, the Chicago-St. Louis line will be among the first operational, cross-state high-speed rail projects in the county and one of the first to connect two major U.S. cities, according to IDOT.

IDOT plans next year to begin operating six sets of bullet trains along a 262-mile route between Chicago and East St Louis, with about seven stops in between.  In addition to East St. Louis, Metro-East will have a station in Alton. Due to safety concerns, the trains will reach maximum speed only in the outstate areas between Alton and Joliet.

Completion of the bullet train line will not be delayed by the Illinois’ ongoing budget crisis, according to IDOT.  The final phase of development is being funded with $1.65 billion in federal dollars, issued under the American Recovery and Reinvestment Act, as well as $300,000 already allocated by the State of Illinois.

However, development of the high-speed rail line has been halting, the department admits.

Construction initially began in the Chicago area in September 2010. On April 1, 2011, a second round of construction was begun to upgrade approximately 96 miles of existing track from Elkhart to Dwight. An additional 18 miles of new, specially-built, high speed rail track was also constructed that year between St Louis and Lenox, with work completed on August 23.

Construction on the project resumed in April 2012, with rail line improvements between Wann and Godfrey and also from Pontiac to Joliet.

Work on the first segment of the high speed rail system was completed in August, 2012 and service began between Dwight and Pontiac on Nov. 22 of that year.

To date, crews have put down more than 220,120 feet of rail to accommodate the faster trains, according to IDOT.  They have placed 55,830 concrete ties, spread 196,265 tons of ballast and installed 27 turnouts.

Groundbreaking was held last year for the new Alton Regional Multi-Modal Transportation Center, on the high speed line, on the former grounds of the Robert P. Wadlow Municipal Golf Course at Homer Adams Parkway and Golf Road.  Completion of that station, which also will serve Madison County Transit District buses, has been pushed back from Dec. 31, 2016 to June 30, 2017.

In the Metro-East area this year, IDOT still needs to undertake bridge improvements along the high speed rail route, on Route 16 at Shipman, and construction of new siding from Shipman to Godfrey.

However, with development of the high-speed rail line’s basic infrastructure now largely completed, IDOT plans to focus over the final months of the project mostly on roadway and safety improvements around the tracks.

More than 150 local residents turned out for the latest in a series public meetings on the Madison and Jersey county segments of the bullet train project, June 9, at the Alton Atrium Hotel and Convention Center.

Many who packed the two-hour session were seeking an update on the project status, according to Scott Speegle, a passenger rail marketing manager with IDOT’s office of communications in Chicago.

Spokespersons say extensive improvements are planned along the entire line including: