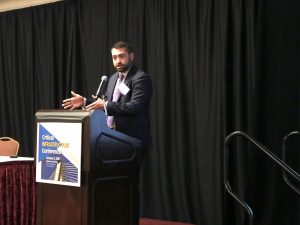 “Infrastructure drives the economy of America and nowhere is that more-true than in Missouri and Illinois,” Illinois Transportation Secretary Randy Blankenhorn told the conference. “We’ve got to find new and better ways to invest in it.”

The federal government, traditionally the primary infrastructure funding source across the nation, is dramatically and permanently scaling back such spending, Alex Herrgott, infrastructure advisor to President Donald Trump, emphasized during the meeting’s keynote address.

However, that means both funding and regulation for infrastructure will be increasingly addressed at the state and regional levels, Ken Franklin, vice president of governmental relations and policy initiatives for Bi-State Development.

“… state legislatures are an integral part of investing in our economy. For the St. Louis region, that means collaboration across the river. Missouri and Illinois are both working towards advancing growth in the region and recognize robust critical infrastructure systems are key to that goal,” conference organizers assessed in the program agenda.

The meeting marked perhaps the first time the Illinois and Missouri state chambers of commerce have ever jointly sponsored an infrastructure conference; with state legislations, state and federal officials, local chambers, regional entities, and business representatives all taking part, one attendee observed.

“it’s critical to approach our transportation infrastructure from a regional perspective,” said Dan Mehan, president and CEO of the Missouri Chamber of Commerce.

“I think that it’s important that the states come together, bring policymakers from both sides of the river, and think regionally,” Todd Maisch, president the CEO of the Illinois Chamber of Commerce.

Few specific infrastructure projects or funding mechanisms were formally proposed during the conference.

However, Russell noted Dupo’s river terminals and railyard are “surrounded by 5,000 acres of levee-protected land. There is nothing else like this in the U.S.”

Conference attendees toured Metro-East development sites, on the day prior to the meeting.

Greater utilization of public-private partnerships was emphasized in a presentation by Ben Brockschmidt, vice president of policy for Illinois Chamber.

An “infrastructure bank” was the subject of passing comment during the conference.

Federal infrastructure funding is being draw down under an executive order signed last year by President Trump.

In light of the nation’s growing budget deficit, the cutback was inevitable, Herrgott asserted; insisting the move is neither “Democratic” nor “Republican.”

“It is a change in process,” Herrgott said.

Traditionally, the federal government has covered around 75 percent of the cost of infrastructure development, with state and local government contributing matching shares of around 15 percent and 10 percent, respectively.

That federal share has fallen to around 25 percent under a trio of new policies implemented over recent months; with Herrgott playing a key role.  Among them: overhaul of the federal FAST Act highway funding program.

While state and local government will be taking on additional infrastructure funding responsibilities, they will benefit from regulatory reforms that will allow state and local officials to obtain all federal permits and clearances for an infrastructure project through one contact person; rather than dealing with up to 14 separate federal agencies, Herrgott said.

Federal officials will not also be required to complete review and permitting or all projects within just two years — down from an average of around seven now, according to Herrgott.

To ensure prompt review, specific compliance objectives and timelines with “milestones” will be established for each project; with federal agencies facing funding penalties when timelines are met, Herrgott said.

Herrgott’s presentation drew a round of applause from meeting attendees.

Beyond funding, the nature of infrastructure projects may also be changing, speakers noted.

“Resiliency in the face of natural and manmade events,” was the theme of a panel discussion led by Brockschmidt; with Clayton Harris III, executive director of the Illinois International Port District; Ricky Goins of the U.S. Department of Homeland Security; Tom Blair, of the Missouri Department of Transportation (MODOT); and Col. Christopher Robertson of the U.S. Transportation Command, headquartered at Scott Air Force Base.

“Smart port technology” — including “predictive analytics, key performance indicators, blockchain technology, and artificial intelligence” — is already being implemented at Canada’s Port of Montreal and will soon be essential at all such facilities, according to Tony Boemi, the port’s vice president for growth and development.

Moreover, the quickening pace of technological development, like project funding changes, will increasingly mean new responsibilities for private businesses and government officials at the state and local levels, asserted Anthony Bedell, U.S. Department of Transportation deputy assistant secretary for intergovernmental affairs, in his presentation on “The Role of Federal Agencies in Emerging Technologies.”

“The U.S. transportation network spans 50 states and includes all modes of transportation. Changes in technology are coming quicker than Congress can legislate, requiring federal agencies to adapt to this constantly changing environment,” Bedell said in a written synopsis of his presentation.

Invited speaker John Drake, executive director for supply chain policy at the U.S. Chamber of Commerce, was unable to take part in the energy panel.

The St. Louis area stands at the center of an intricate, multifaceted trade and transportation network that has made North America the most prosperous market in world history, Canadian Consul-General John Cruickshank told the meeting, during his presentation on “MO-IL/Canadian infrastructure.”

While the meeting centered on infrastructure, Cruickshank used the forum to advocate repeal of remaining U.S. trade tariffs on imports from Canadian.

And several speaks placed emphasis on workforce development in the region; citing labor shortages in transportation and other industries across the region.