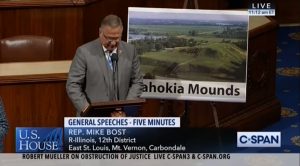 The Belleville-based Heartlands Conservancy is launching an ambitious drive to establish a new Cahokia Mounds and Mississippian Culture National Historic Park; encompassing not only the Cahokia Mounds State Historic Site near Collinsville but a network of Native American mound sites across Metro East — and even extending into St. Louis.

“Cahokia Mounds is a significant archaeological treasure,” said Rep. Bost on the House floor. “Southern Illinois was once home to one of the largest civilizations in what is now the United States, and Cahokia was the center of this ancient civilization. Making Cahokia Mounds and associated mounds sites in the region part of our national park system will help elevate this resource in our nation’s consciousness and deepen our understanding of the peoples and cultures of our past.”

In addition to the popular Cahokia Mounds state park site— with its interpretive center and landmark Monks Mound — the proposed national park would span various mound sites across Madison, St. Clair, and Monroe counties.  It would also specifically include Sugarloaf Mound in St. Louis, the last remaining Native American earthen structure in the town once known as “Mound City.”

Under terms of the legislation, the park would be owned by the U.S. Department of the Interior, through its National Park Service, but developed, operated, and financially supported by an intergovernmental coalition of federal, state, local, and even non-governmental entities. 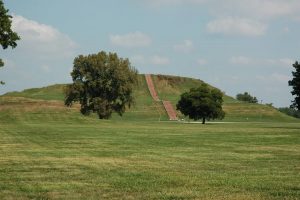 The exact size and boundaries of the proposed national park have yet to be established. However, proponents hope it will include a 1,000-acre expansion of the Cahokia Mounds State Historic Site, which presently takes in 2,200-acres.

They say it will also likely include seven other significant former mound sites around Metro East including:

All four of those locations are already on the National Register of Historic Places.

However, most mound sites around the region have never been so much as formally marked —and many more remain to be identified, the Heartlands Conservancy believes.

Of the 550 mounds believed to have once spanned the St. Louis regional, 120 were in the six miles surrounding the Cahokia Monks Mounds, of which 109 of which have been recorded and 68 are preserved within the site. The area now encompassing the City of St. Louis once had about 80 mounds — all but one now destroyed to accommodate development, according to archeologists.

Proponents hope to join all the sites included in the park through a network of bike and walking trails.

“The Cahokia Mounds represent the indigenous peoples and landscapes that once made up one of America’s first cities in the Western Hemisphere,” said Durbin.  “This designation would ensure we protect this fascinating historical site for generations to come.” 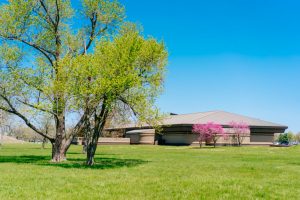 Preliminary plans call for the park to cover seven historic sites across from Mitchell to Lebanon to Dupo.

The national park proposal marks the latest, and most ambitious, in an evolving series of plan to preserve and enhance appreciation of one of the most archeologically significant in the world, according to Mary Vandevord, president and CEO of the Belleville-based group.

In 2016, Heartlands floated plans for a Mississippian Culture National Monument and National Park, essentially a new national monument, under which Cahokia Mounds would have remained an Illinois State Park but operated by the National Park Service.

The popular St. Louis-area landmark is already a UNESCO World Heritage Site and a U.S. National Historic Landmark listed in U.S. National Register of Historic Places, and an Illinois State Park — but not a park of the U.S. National Park system. Currently, the site is administered by the Illinois Department of Natural Resources (IDNR).

Proposals for federal support began a feasibility study completed by the conservancy in 2014, calling for extension of the existing Mounds Heritage Trail around the Cahokia site to additional former mound sites to across the bi-state region.

The study came following the discovering of a significant new archeological site on the former grounds of the closed National City Stockyards, north of East St. Louis, and a growing number of significant findings at the Emerald and Fults sites, according to the conservancy.

However, the effort has taken on increased importance as tight state finances have made the operation of state parks more challenging. The Cahokia Mounds site in 2016 was forced cut back operation of its interpretive center and, a year before, resorted to a GoFundMe campaign to pay for a new brochure.

While finances are also an issue at the federal level, the new proposal for a national park has attracted substantial political support which could improve its chances in Congress.

The IDNR announced support for national park status in 2018, and in May of this year, the Illinois House of Representatives passed a supporting resolution. The Madison County Board is expected to official endorse the effort shortly.

The Heartlands Conservancy also hopes an innovative partnership arrangement will make development and operation of the park more feasible.

Under the proposed legislation, the Department of the Interior would acquire desired land for the park through donation of public land by state or local government and through donation or purchase — using funds specifically donated to the projects — of private land from willing sellers.

The department could enter into cooperative agreements with states, political subdivisions, colleges and universities, non-profit organizations, Native American Tribes, and individual to mark, interpret, and restore nationally significant historic or cultural and natural resources relating to the life of the Mississippian Culture within the boundaries of the historical park, as long as they agree to provide for reasonable public access.

Costs for development and maintenance of the park would be split with the federal government to cover no more than 5o percent.

Public and private partners in the park are not specifically named in the legislation.  Support for the park could be provided in the form of in-kind contributions or valued goods or services.

Once funding was secured, the Department of the Interior would have five years to developing a management plan for the new national park. The plan would be developed in consultation with the Illinois Department of Natural Resources, the Osage Tribe, the HeartLands Conservancy, and other entities.

The legislation can be accessed online at http://bit.ly/32yrQZA by clicking on the PDF at the bottom on the page.