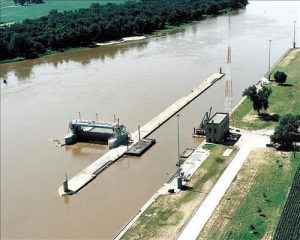 The LaGrange Lock and Dam complex in Versailles is the busiest lock on the Illinois River. (Photo courtesy of U.S. Army Corps of Engineers)

Tariffs and flooding may be getting more attention, but an unprecedented closing of the Illinois Waterway, planned for 2020, could disrupt commerce across much of the central United States, according to some freight industry leaders.

They are warning shippers and their customers to modify shipping schedules or establish alternative freight routes to ensure a reliable flow of vital commodities.

However, so far, those warnings are garnering insufficient interest, according to Mary Lamie, executive director of the St. Louis Regional Freightway; noting the massive reallocation commercial river vessels, railroad cars, over-the-road trucks and intermodal transfer facilities that may be required.

Especially concerning, she says are limited closings along the Illinois Waterway are now underway with more scheduled for August of this year.

In a prepared statement, Mike Toohey, president and CEO of Waterways Council, Inc., described commodity movement during the closure as “the great unknown.”

It’s vast system of rivers, lakes, and canals which provide a key shipping connection from the Great Lakes to the Gulf of Mexico via the Illinois and Mississippi rivers.

Each year, more than 10 million tons of corn and soybeans traverse the waterway, bound for export. Non-agriculture products moved through the Illinois Waterway system locks range from chemicals and petroleum products to raw materials for steel mills and related outbound product, ethanol, cement and styrene

A series of eight locks, managed by the Army Corps of Engineers, controls water flow from Lake Michigan to the Mississippi River system. The upper lock, T.J. O’Brien, is seven miles from Lake Michigan on the Calumet River. The southernmost lock is in the LaGrange Lock and Dam, in Versailles, Illinois, about 90 miles upstream from the Mississippi River.

Six of those eight locks on are scheduled to undergo major infrastructure repairs. With a two-week closure planned by the U.S. Army Corps of Engineers beginning as early as August and closures of 90 to 120 days expected in the summers of 2020 and 2023.

To minimize the time the Illinois River is closed to freight, the Army Corps, in cooperation with the shipping industry and other interested parties, has developed plans for the simultaneous closure of multiple locks to reducing impact on navigation.

However, shipping lines and their customers will still need to either schedule freight shipments around the closing or use alternative shipping routes, according to Toohey.

The Mississippi River will likely represent the best alternative, according to Lamie. Freight terminals in St. Louis and Metro East are among the most efficient in the nation and should be able to handle a substantial increase in both incoming and outgoing loads, she says.

However, advance planning and advance booking of carriers and terminal facilities will be needed, she said.

In all, nearly 30 million tons of commodities a year move through the southernmost and busiest lock on the Illinois River — the LaGrange Lock and Dam in Versailles.

The Starved Rock Lock and Dam is on the list of dams along the Illinois River that are targeted to be closed in 2020. (Photo courtesy of U.S. Army Corps of Engineers)

The LaGrange Lock is the most urgently in need for major rehabilitation and repair, according to Lamie, and a major driver of the entire Illinois Waterway improvement project.

The six locks, scheduled for improvement, will all be closed for roughly coinciding periods of 90 to 120 days between July 2020 and October 2020.

During the scheduled closures, no vessels will be able to pass through the affected locks. An exception to this restriction could occur at the LaGrange and Peoria Locks if water levels become high enough that the wicket portions of the dams could be lowered for open-pass.

That would allow vessels to pass over the wicket dam without using the lock.

While the bulk of the work will not get underway until summer 2020, the shipping industry will get a taste this summer of what to expect in 2020 and 2023, as the Starved Rock Lock & Dam in Ottawa, Illinois and the Marseilles Lock and Dam in Marseilles, undergo partial closures this month and in July, with full closures scheduled from Aug. 16 to 30.

“It’s vital that industry members are aware of the plans, the timing and any steps they need to take in advance of the closures to help minimize the disruption to their operations or, to potentially be a part of the solution,” said Lamie. “Shippers already route freight to the St. Louis region where the exceptional freight network means they benefit from lower distribution and logistics expenses and shorter travel times. We should have the capacity to take on more and be a part of the solution for those who will be impacted, if the planning starts early.”

“Plan, be flexible and be ready,” Toohey adds.