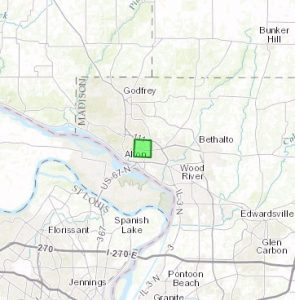 Alton and other riverfront towns in the immediate area were hard April 30- May 3 by steady rains that flooded streets, creeks and neighborhoods. (Courtesy of National Weather Service)

Having fought record flooding along the Mississippi River and its tributaries just over a year ago, Metro East emergency responders were ready last week as near record rainfall again swelled area waterways.

Riverfront areas in Alton, Grafton, Elsah, and Chester were inundated.  Sections of several major Metro-East highways — including Hwy. 100 from Pere Marquette State Park to Grafton and U.S. Hwy 50 in the Lebanon and O’Fallon areas — were closes as water covered the pavement.

Also closed for a time were Illinois Hwy. 155 from Laurent Road to Fish Lake Road in Prairie Du Rocher and Illinois 3 from Water Street in Chester to Cora.  Westbound I-64 was shut down for a time near Illinois Rt. 4, on the morning of May 4, after a tree fell across the roadway. In Caseyville, 89th Street was closed due to a mudslide.

However, overall, flood levels across the St. Louis remained below those recorded in December 2015 to January 2016.

Most flooding occurred along the Missouri River on the Show Me State side of the region — although West Alton, Mo. was evacuated and the lower lanes of U.S. Highway 67, approaching the Clark Bridge, were closed through the West Alton floodplain, with southbound traffic diverted to the upper lanes.

Flood watches and warnings across Metro East expired May 5.

Metro-East area fire departments and law enforcement agencies have directly attributed no fatalities and few injuries to the high water, at the Chronicle’s deadline — despite the dramatic rescue of a youth from an overflowing manhole in O’Fallon and two rescues of stalled motorists on flooded roadways by fire departments from Lebanon and O’Fallon.

County, township, municipal roads were closed for period in Belleville, Mascoutah, Caseyville, Centreville, Freeburg, St. Libory and Illinois Hwy. 15 near Alorton. Several streets in and around Granite City were closed, mostly in Nameoki and Chouteau townships, due to flood waters that in some cases were several feet deep.

Lebanon Community Unit School District No. 9 cancelled classes at its junior and senior high schools on May; representing the only school closing attributable to flooding in Metro East.

Nearly 2,000 people were without power for a few hours Sunday afternoon after the storm knocked a tree onto a power line, according to Ameren. The power failure, which lasted from 1:40 p.m. to 4:30 p.m., affected customers in East St. Louis, Belleville and Centreville.

Agencies have yet to release property damage estimates.  However, flooding along the Mississippi 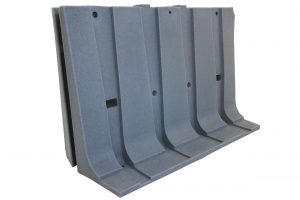 appeared confined largely to waterfront areas where many structure are built to withstand high water events. There were no reports of breached levees or failed floodgates in Metro East.

In Alton, public works crew erected a new removable flood wall along West Broadway to protect the city’s downtown business.  Marketed under the tradename “Muscle Wall,” the prefabricated components flood barrier consist of a series of interlocking segments — similar to the temporary concrete barriers often used along highways — but made of a plastic material known as Nilex.

Following installation, the Muscle Wall segments are filled with water to provide weight and stability.  A lip on the lower end of the L-shaped components, under the weight of contained flood water, provides extra stability and allows the wall to withstand even rushing water. The units are increasingly used around the nation for not only flood control but water retention ponds and erosion control, according to the manufacturer.

Each segment of the component flood wall provides the protection of 468 sandbags, according to the manufacturer.

The Madison County Public Works department dispatched a sandbagging machine to Alton to help protect area not protected by the component flood wall.