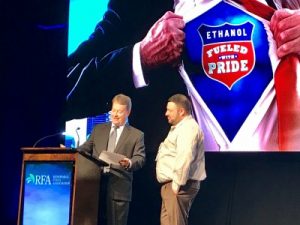 A former Granite City steelworker is making headlines after being awarded a scholarship from the Renewable Fuels Association, a national trade organization for America’s ethanol industry.

While Wense is now finding success in the ethanol industry, his future wasn’t always so clear.

In April 2015, Wense was one of nearly 2,000 workers permanently laid off from U.S. Steel, as a result of steel imports by foreign companies.

As a 41-year old husband and father of two boys, he was forced to start over, beginning with a return to the classroom for retraining.

Due to support from the Trade Adjustment Assistance Act and the Workforce Innovation Opportunity Act (WIOA) through Madison County Employment and Training Department (MCETD), Wense was able to pursue his degree in process operations technology at Lewis and Clark Community College.

“Going back to the classroom was intimidating, but after doing my research and learning about the PTEC program and the job opportunities it prepares you for, I decided to dive in and give it my best,” Wense said. “Thankfully, with the support of incredible faculty, staff and case managers, I didn’t just pass, but finished my degree with honors.”

He credits MCETD and the work of his dedicated case managers at Lewis and Clark and Southern Illinois University Edwardsville for supporting him through the program, including helping him to receive an extension of unemployment benefits through the Trade Act to complete his degree.

MCETD Director Tony Fuhrmann said Wense’s achievements were supported by the very types of job training programs highlighted in the State of the Union address earlier this month.

“We are so proud of Chris, who embodies the positive impact workforce training programs can make when you bring together the right combination of support systems, positive attitude, and demand-driven training,” Fuhrmann said.

“While returning to the classroom can be daunting, MCETD and our education partners like Lewis and Clark and SIUE are committed to providing the financial, logistical, and moral support students need to succeed. From tuition and fees to transportation, tutoring, and professional development skills, we try to address all of our customers’ needs so that they can get back to work in not just a job, but a career,” he said.

During Wense’s last semester in the PTEC program at Lewis and Clark, he started an internship at the National Corn-to-Ethanol Research Center at Southern Illinois University Edwardsville. There, he was able to put his classroom knowledge to practice in an applied, hands-on environment that replicates industrial conditions. Today, Wense is pursuing his bachelor’s degree in Industrial Technology from Southern Illinois University Carbondale while working full-time as an operating technician at the NCERC.

“Job training programs like TAACCCT were created specifically for this purpose: to ensure that workers like Chris are able to quickly re-train and gain critical technical and soft skills that make them competitive for careers in the bioeconomy,” Breckenridge said. “Through hands-on education and training programs and strong partnerships with industry, we are filling the jobs of today and preparing the workforce for tomorrow.”

“I hope Chris’ story gives others hope, and raises awareness about the resources available locally at MCETD, L&C, and SIUE for people to get the skills they need to start a new career,” Breckenridge added.