The annual rankings examine more than 1,200 cities with populations of more than 25,000 but less than 100,000. Each city is given percentile grades based on five main criteria: affordability; economy; education; safety; and quality of life. The website also ranked O’Fallon the top town in Metro East in 2017.

Drawing particularly high marks for its booming economy, O’Fallon is also the 10th best place to live among. area suburbs, according to the website. (The west St. Louis County suburb of Ballwin ranked first in the bi-state region.)

Collinsville is Southwestern Illinois’ second-best place; drawing mid-range ratings in most categories, according to WalletHub.

O’Fallon and Collinsville are the only two Southwestern Illinois communities ranked by the website among the top half of all small cities nationwide. O’Fallon is scored in the 53rd percentile; Collinsville in the 51st.

— Carbondale: Percentile ranking: 23; based on quality of life and some safety concerns.  (In only one percent of U.S small city, do local workers get less hours on the clock each week.)

— Granite City: Percentile ranking: 22; based on a favorable affordability ranking, offset by economic, quality of file and safety ratings.

— Alton: Percentile ranking: 20; due to economic and safety problems that overshadowed good affordability, education and health, and quality of life ratings.

— Belleville: Percentile ranking 19; based on economic and safety conditions that offset good affordability, education and health, and quality of life ratings. (Belleville has second lowest income growth among all U.S. small cities, the survey found.)

East St. Louis was one on 20 towns ranks in the bottom 1 percent of all small cities nationwide; with low marks in all categories. It is tied with Blacksburg, VA and State College, PA for the highest percentage of population in poverty.

Ranked by the website as the best small city in Illinois is the Chicago suburb of Highland Park — one of 18 communities ranked in the top one percentile of small towns nationwide.

Overall, Westport, Conn., is the best small city in the U.S., according to the survey.

Only two other acute-care hospitals, among the 27 in the St. Louis region, received the group’s top-level safety ranking.

Rating for other Metro East hospitals:

Also receiving top level rankings in the St. Louis region were the Mercy hospitals in Festus and St. Louis.

No hospitals in St. Louis received an “F,”

Swansea -based Holland Construction and Edwardsville-based Fireside Financial broke ground, Nov. 6 for their Whispering Heights development in Edwardsville. The mixed-use structure will include 153 apartment homes and over 18,000 square feet of retail and restaurant space.

Apartments will offer upscale, modern interior finishes, private garage parking, a state-of-the-art fitness facility, and rooftop terraces. Located off Route 157, minutes from downtown Edwardsville and immediately adjacent to the Madison County Transit Bike Trail.  The complex is expected to open in fall of 2019.

The package includes higher wages for steel workers, who had been working under terms of a wage-freeze for the past three years.

The steelmaker and the union announced a tentative labor pact on Oct. 15.  A few weeks early, on Sept. 6, union members in Granite City and elsewhere, in September, voted to strike if an agreement could not be reached. 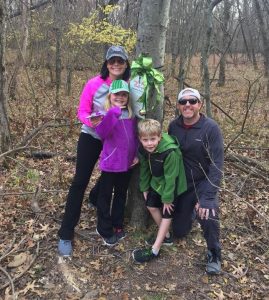 Jingle bells are tied to trees in twelve parks across the Metro East. Challenge participants have six weeks to visit the parks, find each tree, take a selfie with the bell, and post the photo to Facebook, Twitter, or Instagram using #jinglehike. Participants can also email photos to treks@heartlandsconservancy.org.

For each photo submission, participants will be entered to win prizes. If a person finds six or more of the trees, he or she will be entered to win the grand prize — a $325 gift card to the Alpine Shop. Bonus entries will be awarded for correctly identifying the tree species. Other prizes include gear from the Alpine Shop and Toolen’s Running Start.

There is no fee for participating in the challenge, but participants must be at least 14 years old to win prizes. A map of all twelve parks and instructions will be available at HeartLands Conservancy offices, the Alpine Shop, Toolen’s Running Start, and several other locations in the region. More information and a printable map can also be found online at https://www.heartlandsconservancy.org/jingle2018.php.

The Valmeyer Village Board has approved an incentive package designed to spur development of a key parcel in the center of town – and with it, hopefully, redevelopment of the surrounding area.

Currently co-owned by the village and a private investment group, the tract runs along both sides Knobloch Boulevard, the village’s central corridor, from the Village Hall on the east to the State Bank of Waterloo; on the west; encompassing land adjacent to the Valmeyer U.S. Post Office.

The village and the new investor group — headed by prominent semi-retired businessman and Illinois Finance Authority board member George Obernagel of Waterloo — purchased the property last December after the previous development group acknowledged their project was dead.