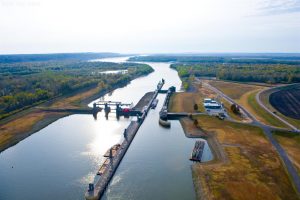 The Kaskaskia Regional Port District is one of the Metro East agencies that now must comply with data transparency laws put in place by Gov. J. B. Pritzker. (Photo courtesy of Kaskaskia Port District)

The County Board was scheduled to vote on the resolution Jan. 16 for the reconstruction of Seiler Road from Humbert Road, east 1.21 miles to approximately 460 feet west of Wenzel Road. On Jan. 10, the Transportation Committee approved awarding the contract to Stutz Excavating, Inc. of Alton, who submitted the lowest of eight bids.

County Engineer Mark Gvillo said Phase is set to start with tree clearing and the relocation of utility lines within the next few weeks.

“Once the contract is awarded and signed they have until April 1 to get trees cleared,” Gvillo said.

Gvillo said he’s not sure yet if the road would be closed during that time. The public can visit the county’s website at https://cms4.revize.com/revize/madisoncounty/departments/highway2/road_closure.phpto to check if there is a road closure.

County Board member Tom McRae of Bethalto and chair of the Transportation Committee said he is pleased work will start soon on Seiler Road. He said the road is an important corridor in Northern Madison County.

“There are a lot of residents who travel along Seiler Road,” McRae said. “The improvements are a long time coming.”

“I’m glad to see the start of this project,” Walters said. “It will be a much safer road once construction is complete.”

The project will also include storm drainage improvements, hot-mix asphalt pavement along with other necessary work. In 2017, the county approved $300,000 on engineering study costs and for the purchase of right-of-ways in anticipation of the Seiler Road project.

During the past year, the county spent approximately $4.15 million in County Roads, County Bridge and Motor Fuel Tax funds to finance various road and bridge projects, improvements and maintenance. The county also spent $1.3 million in federal funding on road construction.

“We are happy the Seiler Road project in moving forward,” Chairman Kurt Prenzler said. “We are also working on other important projects throughout the county.” 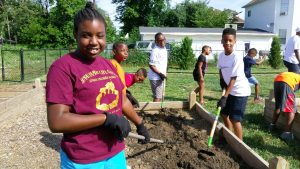 To qualify for CDBG funding, agencies must provide direct assistance to low-to-moderate income persons or households, as defined in U.S. Department of Housing and Urban Development (HUD) standards.

To receive CSBG funding, agencies must provide direct assistance to very-low-income persons or households, as defined by the federal standards.

“There are many organizations with whom we (city officials) partner that work in the trenches to effect  positive changes in East St. Louis. The awarding of additional funds will in turn benefit East St. Louis residents and others whose needs might otherwise go unmet,” she said.

Grant application this year became a competitive process, as demand exceeded the available funding. Grants were allotted after applications from across the county were scored by the county grants department.

Interested non-profits were encouraged to attend a technical assistance meeting in Belleville, Beach said. The grant application process was also explained during a related outreach meeting in East St. Louis. Both were advertised in the media and on the county website.

Some recipients have received grants in prior years; others are receiving grants for the first time, Beach said.

Final grant awards are made after the county receives required documentation of services from non-profits, according to Beach. Grantees are monitored throughout the year to make sure assistance is provided as promised, he emphasized.

Among the selected non-profits are:

Seventy-two Illinois and Metro East agencies are participating in the St. Louis Complex Coordinated Terrorist Attack (CCTA) Program — which this week launches a series of workshops designed to enhance preparedness against nontraditional threats.

CCTAs are defined as “acts of terrorism that involve synchronized and independent team(s) at multiple locations, sequentially or in close succession, initiated with little or no warning, and employing one or more weapon systems: firearms, explosives, fire as a weapon, and other nontraditional attack methodologies that are intended to result in large numbers of casualties,” according to program literature.

“Prepared for the Next … “ is the program’s purposely ambiguous slogan; emphasizing its unique mission to ready the St. Louis area for issues that may be unprecedented and, effectively, unforeseeable.

Launched in August 2018 and conducted under the auspices of the East-West Gateway Council of Governments, the CCTA program is “an intensive two-year track of preparedness planning, training, and exercises,” according to program literature.

A year-long planning process began in August.  A nearly-year-long series of training and exercise commences this month; running through the end of 2019. A “capstone project,” undefined in the program’s publicly-released literature, will take up the final year of the project.

The program’s series of six workshops on interagency response began Tuesday, Jan. 22, with a meeting for area fire departments in Jefferson County, Mo., and a workshop on emergency medical services the following day, January 23, at the same location.

The series moves to Madison County on Tuesday, Feb. 5 with a workshop on command and control; and the following day, on law enforcement.

The program — overseen by the nationally recognized emergency management and homeland security firm, Hagerty Consulting — is custom-tailored to address pre-identified gaps and build on “the region’s foundation of capabilities to respond to a CCTA through regional partnerships and collaboration between public safety agencies and whole community partners,” according to the project’s inaugural newsletter, released this month.

Publicly release documents do not identify the gaps or strengths in the area’s terrorist response capability.

They also do not specifically address whether the newly developed CCTA response capability could be used in responding to the type of civil unrest for which St. Louis has become well-known over recent years.

They also do not indicate whether defense installations like Scott Air Force Base or the National Geospatial Intelligence Agency West Campus could make the area an attractive target for terrorists.

The program is funded through a $1.474 million grant from the U.S. Department of Homeland Security and its Federal Emergency Management Agency (FEMA) – one of the larger grants issued under the department’s national CCTA program.

A winter storm that dumped eight inches of snow across most of Metro East — with considerably higher totals to the west and north — has not yet meant potential for flood-causing runoff in the Upper Mississippi Valley, according to the National Weather Service (NWS).

However, U.S. Army Corps of Engineers divisions across  the Upper Mississippi and Missouri rivers — which come to a confluence in the flood-prone areas around Grafton — are preparing for a busy spring runoff season; with controlled water release already underway at one Upper Missouri location.

At the Chronicle’s deadline none of the Army Corps’ three Metro-East Mississippi River monitoring stations were at flood stage, although its Kaskaskia River station, just below Carlyle Dam, indicated minor flooding earlier in the week.

At least six Metro East boards and commission will have to demonstrate their compliance with applicable state statutes and reporting requirements, as the result of an executive order signed Jan. 15  by Gov. J.B. Pritzker.

Under the new “Back to Basics” directive, all 287 of the state’s agencies, boards and commissions must immediately review their compliance with statutory mandates, come into compliance with data transparency laws and release all data that is required to be disclosed under state law.

They then must consider potential new, voluntary disclosures that could improve transparency and provide plans to address all finding of all audit findings conducted over the past four years.

The order calls for commissions to submit a compliance plan for all statutory obligations and audit recommends within 60 days.

Compliance with laws and regulations on publishing data must be achieved within 30 days. Boards must then review practices to ensure future compliance and move toward new voluntary data disclosure efforts within 60 days.