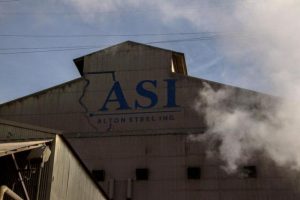 Alton Steel is getting a plant upgrade.
(Photo courtesy of Alton Steel Incorporated)

In what executives describe as the start of a new era for their company, Alton Steel, Inc. has announced plans for a $4.75 million plant upgrade that will allow the firm to produce steel coil.

Steel coil is used in a variety of applications such as refrigeration.

Alton Steel currently produces only rolled steel bar which must then be shaped into coil or other finished forms by customers.

The firm’s new Garrett coiler will provide customers a wide size range of coiled bar, from 0.750-inch through 1.812-inch diameter, with coil weights of approximately 5,000 pounds. It can produce coil of virtually any length, company officials add.

The new steel coiler will be installed in an existing building on the company’s property at 5 Cut St.

The expansion will not interfere with the company’s production of hot-rolled, cut-to-length steel bars, the spokespersons emphasized in a July 31 press release.

The plant upgrade is expected to be completed in first quarter of 2018.

Hildenbrand, an Air Force reservist and intelligence analyst, has a degree from the University of Iowa law school as well as a 28-year military career — having also served in the Army National Guard and Air National Guard.

A counter terrorism expert, Hildenbrand has been deployed to Afghanistan, Kuwait, Turkey, England and Guantanamo Bay, and has worked in the Pentagon. She describes herself as new to politics. She moved to Metro East from Washington, D.C. in 2008.

Clayborne, also an attorney, has served Illinois Senate Majority Leader — the second highest officer in the state’s Upper House — since 2009 and has represented the 57th District since 1995.

Both reside in Belleville.

No other candidates have yet announced plans to run in the March 2018 primaries in the district.

The district includes most of St. Clair County and part of Madison County.

She earned her law degree while serving in the U.S. Army and was certified as a military judge by the Army’s Judge Advocate General.

Crowder was appointed an associate judge in the circuit in 1999 and has chaired the court’s Family Violence Prevention Council since that time.  She was elected a circuit judge in 2006 and won retention in 2012.

An Edwardsville native, Smith launched her campaign as a Democratic candidate for the Madison County Court last week with a rally at the Wildey Theatre, attended by Crowder.

Ameren Illinois is equipping nearly 240 company trucks — including 50 in the Metro East area — with automated external defibrillators (AED) in an effort to enhance employee safety.

“There are inherent dangers in keeping the lights on and the natural gas flowing, so first and foremost, this is a step we are taking to ensure the health and safety of our field personnel,” said Ameren Illinois Chairman and President Richard Mark. “These AEDs will provide our co-workers with an accessible tool that they can use in an emergency situation.”

Employees who suffer cardiac arrest at work have only a 5 percent to 7 percent chance of survival when an AED is not available and defibrillation is not possible until emergency medical personnel arrive, according to the American Heart Association.

In contrast, the survival rate one year after cardiac arrest for those who receive immediate defibrillation is 60 percent.

The new AEDs on each truck are specially design for ease of use during emergencies, according to Ameren Illinois Director of Safety Karen Boulanger.

Employees who suffer heart problems while in remote rural areas of the Ameren service area may be at greatest risk, the company notes.

“They even provide verbal instructions, walking our employees step-by-step through what is generally an incredibly stressful situation,” said Boulanger.

A team of Metro East businesses are undertaking a $100,000 restoration of the deteriorated, decades-old Kinder Park playground in Fairmont City. The Fairview Heights construction-management company IMPACT Strategies and its subcontractors are providing a new 20 x 16-foot wooden pavilion and related components, including a concrete pad and sidewalks to the structure.

Construction crews have spent the past several weeks framing the pavilion, setting trusses, sheeting the soffits and ceiling, and installing the electric service and lights. The structure will be painted and a standing seam metal roof installed in the coming week.