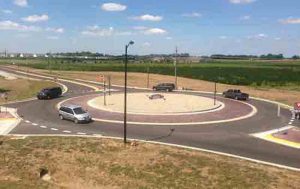 Maryville hopes to begin construction of the village’s second roundabout next year on Keebler Road. The first, shown above is on Lakeview Drive. (Photo courtesy Juneau Associates)

Metro-East officials are planning to undertake a total of 33 road and transportation improvement projects, at a total cost of $21,237,363, in 2017 to ease traffic congestion and improve air quality in some of the region’s fastest-growing and economically important areas.

Eastside county and municipal officials are applying for a total of $15.5 million in federal Surface Transportation Program (STP) and Congestion Mitigation and Air Quality Improvement (CMAQ) grants to help cover the cost of those improvements, according to the East-West Gateway (EWG) Council of Government.

The federal government offers road improvement grants on a matching share basis.  However, the EWG presently projects the State of Illinois’ contribution to each of the planned Metro-East road improvements to be “$0”; suggesting the projects may be endangered by the state’s ongoing budget crisis.

Metro-East road projects submitted for federal funding during the current application cycle are as follows. The total estimated cost for each project is shown in parentheses.

Alton – State Street, south of Rozier Street to north of the Delmar Avenue to Belle Street, resurfacing and pedestrian improvements ($931,250).