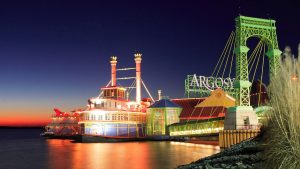 Alton Argosy Casino took in more than $9 million in revenues during March, April, and May.
(Photo courtesy of Penn National Gaming)

An ongoing statewide casino shutdown, due to the COVID-19 pandemic, will likely cost the operators of Metro East gaming halls more than $35 million in gross revenue — and host municipalities more than $2 million in tax revenue, an analysis of Illinois Gaming Board (IGB) data indicates.

The state gaming board on March 14 suspended gambling operations at all casinos; extending the order indefinitely on April 30.

The IGB’s shutdown order came just as the state for the first time was allowing sports betting as casinos.

Alton originally anticipated receiving $2,250,000.00 in state-collected gaming tax during its current, 2019-20 fiscal year, according to city budget documents, with another $ 475,000.00 in local admission taxes.

Projections for the city’s 2020-21 budget year, which begins July 1, will come with a draft budget slated for release next week.

Alton officials are considering a freeze on discretion spending and other cost cutting as they prepare the city’s new budget.

Earlier this month city officials told reporters that they are considering layoffs as result of casino revenue losses.

However, with the East St. Louis City Council May 14 meeting canceled, no action on either city budget amendments or layoffs has so far been taken.

“This is fairly unique. Not a lot of other counties are taking this approach,” Corona told the May 20 meeting of the Madison County Board.

Representing a partnership among the County Health Department, Lewis & Clark Community College (L&C) and the Southern Illinois University (SIU) School of Medicine, the service will utilize the L&C Mobile Health Unit, staffed by health department personnel to administer tests; with supplies and expertise provided by the SIU Medical School.

Tests will then be sent to the Illinois State Department of Health Laboratory for analysis, Corona said.

The unit will be used primarily to reach transportation-dependent or other individuals who might not otherwise seek testing at the county’s two standing coronavirus testing centers, in Granite City and Wood River.

Testing was expected to begin in Alton early this week, with the unit often stationed in high pedestrian traffic areas near housing complexes, Corona said.

Madison and Venice were among the communities which board members specifically asked the unit visit over the coming weeks.

Property owners should begin receiving their bills during the first week in June, Slusser told the May 20 meeting of the Madison County Board.

As usual payments will be due July 9.

However, due to the COVID-19 pandemic and subsequent shutdown of most segments of the economy, terms of payment will be relaxed this year, in consideration of economic hardships being suffered by many county residents, Slusser added.

“As long as first payments are made by Sept. 9, there will be no late fee,” Slusser said.

However, the relaxed payment policy will not apply to escrow payment, Slusser emphasized.

Like only one other county in Illinois, Madison County collects property taxes over four payment periods — with due dates in July, September, October, and November, Slusser said.

Most other counties have a single due date for property taxes or two payments periods.

The start of the tax collection cycle will mean that school districts and other local government entities – some cash strapped due the economic shutdown — should begin seeing some tax revenues in July, Slusser said.

Selection criteria for the UMC award include: excellence in teaching, civility and concern for students and colleagues, commitment to value-centered education, as well as service to students, the institution of learning, and the surrounding community.

Rennegarbe, a McKendree alumnus who resides in Nashville, received the Illinois Critical Access Hospital Network’s Service Award in 2013 for her role in the development and enhancement of rural nursing. She served as chief executive office and chief nursing officer at Salem Township Hospital in Salem from 1996 to 2003,

After earning a master’s degree in psychology from McKendree in 2001, Krebel began counseling military service members and their families at Scott Air Force Base.

She has developed a military psychology course using her counseling education and experiences as a counselor on base.

A pair of new commercial developments at the intersection of Interstate 55 and Governor’s Parkway are about to make the interchange the “Gateway to Edwardsville,” according to their developer.

Pin Oak Plaza is to feature a Hilton Garden Inn, Travel Plaza with food and fuel, and built-to-suit office and retail space on a 95-acre tract at the southwest corner of Interstate 55 and the parkway (Illinois Route 143).

The Point, a 55-acre, mixed-use project on the northwest corner of the intersection is to be built around a new central roadway through the development, with green space and walking trail on the periphery and additional acreage reserved for future development.

Pangea Development of Mascoutah plans to break ground on both this year, although the Point has yet to be approved or even formally considered by Edwardsville regulatory boards. Development of the Point is also contingent on a new signalized intersection, connecting Governor’s Parkway — one of Edwardsville’s major thoroughfares — and the project’s proposed new roadway.

Both projects are intended to capitalize on Edwardsville’s new Plummer Family Park, a sports complex slated to open later this year just south of the Pin Oak Plaza site.