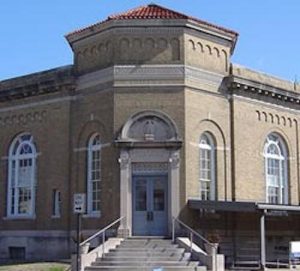 A citizens group on May 6 filed in Madison County petitions with more than 10,000 signatures, to place on the November general election ballot a proposal to permanently limit the county’s property tax rate. (Photo courtesy Madison County

The National Geospacial-Intelligence Agency (NGA) has received some 1,600 formal comments from the public regarding the agency’s tentative decision to locate its new Next NGA West (N2W) facility in the City of St. Louis, instead of a site just north of Scott Air Force Base in St. Clair County. A 30-day comment period closed May 2.

Agency officials have not publically released any information on the content of those comments, but acknowledge the response suggests a high level of public interest in the project. Typically, calls for public comment by federal agencies draw 100 responses or less.

The NGA is expected to announce a final decision on the location of its new high-tech intelligence complex in June.

Meanwhile, U.S. Sen. Mark Kirk (R-IL) is asking the Government Accountability Office — the investigative arm of Congress — to determine whether the U.S. Army Corps of Engineers followed proper procedures in developing its Final Environmental Impact Statement on the N2W.  The document effectively recommended the $1.7 billion NGA western headquarters be built in north St. Louis. Sen. Kirk contends the report was biased and inaccurate.

Madison County residents could be voting on a proposal to permanently limit the county’s property tax rate during the November general election.

A group led by Edwardsville veterinarian Mike Firsching and Madison County Treasurer Kurt Prenzler on May 6 filed petitions, with more than 10,000 signatures, to place the issue on the fall ballot.

Signatures must still be verified by the Madison County Clerk’s office. However, a news release from Madison County Deputy Treasurer Doug Hulme notes the petitions have far more than the minimum of 8,033 signatures necessary to place the tax referendum before voters.

If approved, the measure would effectively lower the county’s present property tax rate by five cents. Prenzler, a Republican who is challenging incumbent Democrat Alan Dunstan for Madison County board chairman on the fall ballot, says the limitation is needed to provide relief for property owners in a county where taxes have been steadily rising.

However, Democrats say tax bills have increased across largely as a result of hikes by cities, villages and other local taxing entities – not the county.

Traditional Madison County Circuit Court operations at Collinsville City Hall are being terminated and replaced with a full-time circuit clerk’s office in the building, according to joint May 6 news release.

The closure is primarily a cost cutting measure, according to the release. It comes after an architect’s study found the city hall’s current courtroom is too small to meet the circuit court’s need and an upgrade would cost some $300,000.

However, the move will also help streamline court operations, according to the release.

The circuit clerk’s office will now be staffed by a fulltime court employee who will provide services including accepting payments for  fines and costs, conducting record searches and other court business pursuant to Illinois State statutes, according to the release.

The arrangement will result in no loss of revenue for either entity, according to the news release, and will provide for some additional “consolidation of costs” between the city and county.

Although some sections of the Metro-East are experiencing some outward migration of older adults, senior citizens overall represent a growing percentage of the area’s population, according to U.S. Census Bureau data.

In fact, Monroe County, like St. Charles and Jefferson counties in Missouri, is increasingly a retirement haven for St. Louis area older adults.  The county’s older adult population grew 25.9 percent over just four years, from 3,701 in 2010 to 4,658 in 2014.  The county experienced a 13.9 percent older adult in-migration rate.

Madison County experienced a 4.1 percent increase in its older adult population over the same period, from 36,923 to 38,428; due almost entirely to an aging population. The county had only a 0.2 percent older adult in-migration rate.

Memorial Hospital and BJC HealthCare plan to develop a $22 million medical office building in Shiloh next door to their new Memorial Hospital East facility. The three-story, 70,500-square foot medical building is expected to open by the end of 2017.

Development of the building is subject to approval by the Illinois Health Facilities and Services Board, which is scheduled to consider the project during its August meeting.