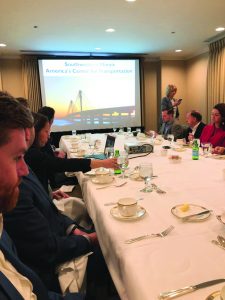 A new St. Louis Regional Economic Development Alliance — announced in February by a trio of the region’s most powerful business organizations — will bring new focus and additional private sector resources to the area’s search for solid economic development opportunities, according to a spokesperson.

That can be a surprisingly complex task involving a range of marketing functions, Mueller said.  Among them: basic research on industry trends; identification of businesses eyeing new or expanded facilities; initial contact with company representatives; development of business-specific information on St. Louis-area locations; and marketing presentations to site selectors, she said.

Just last week, AllianceSTL partnered with Leadership Council Southwestern Illinois and the Monroe County Economic Development Corp to host a luncheon in Chicago for site selection consultants, real estate executives and trade and investment representatives from Japan, Germany, and the UK. This luncheon was part of an ongoing program by the AllianceSTL organizations to market the St. Louis region and Southwestern Illinois.

Prior to AllianceSTL, the St. Louis Regional Chamber had already worked on several projects in the Metro East, including an effort with Bond County officials to market development sites near Greenville, Mueller noted.

“It is important that Metro East knows that we have been and will continue to work on their behalf,” AllianceSTL CEO Steve Johnson. Johnson formerly served as the CEO of Missouri Partnership, the state of Missouri’s public-private economic development organization.

Until now, the private sector only had about five people devoted primary to regional business recruitment services the St. Louis area, Mueller said. The new entity will have around 15 with a $4 million annual budget, putting it on a par with the best programs in comparable regions, Mueller said.

Mueller takes exception to a report in the March 6 Metro East Chronicle that Civic Progress —an organization comprised of the chief executive officers of the 33 largest corporations in the St. Louis area — had effectively abandoned support for the St. Louis Economic Partnership (SLEDP), as a leading economic development agency in the region. 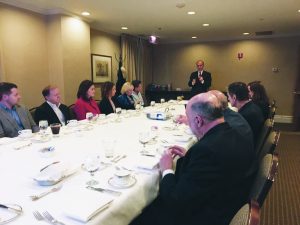 “Successfully marketing to large corporations and developers — notoriously secretive about their plans — requires a deliberate focus on understanding and solving the client’s pressing business issues,” said Mueller. “It also calls for a seamless process between all the private and public entities involved in the company’s recruitment.  Helping to manage that overall process and ensuring it’s invisible to the client is a key role for AllianceSTL.”

Mayor Emeka Jackson-Hicks, the first female chief executive of the City of East St. Louis, was recognized as a contemporary history maker, March 13, by the State of Illinois Members of Delta Sigma Theta Sorority, Inc.; in conjunction of the annual observance of Women’s History Month.

In an online tribute, the sorority — consisting primarily of African-American business and professional women — noted that Mayor Jackson-Hicks recently served as a member of Gov. J.B. Pritzker’s Transition Team on Job Creation and Economic Development.

Founded in 1913 by 22 at Howard University, Delta Sigma Theta Sorority, today has more than 200,000 members in more than 900 chapters located across the United States and in seven other nations.

Mayor Jackson-Hicks joined the sorority while pursuing her accounting degree at the University of Illinois at Champaign-Urbana.

Since 1988, U.S. presidents have issued annual proclamations designating the month of March as Women’s History Month.

Fourteen Metro East restaurants — and a chiropractic practice — will mark World Water Day, this Friday, March 22, by raising funds to provide safe, sustainable sources of drinking water in some of the poorest areas of Africa.

The 15 Belleville, O’Fallon and Edwardsville establishments will donate a portion of proceeds to Illinois-based Marion Medical Mission, which has brought clean water to over four million throughout Malawi, Tanzania and Zambia, through well-digging and other projects.

World Water Day is an annual United Nations observance day that highlights the importance of freshwater. It has been celebrated around the world with a variety of events since 1993.

UNICEF reports that in sub-Sahara Africa, one in five children die before their fifth birthday because they lack potable water. 663 million people around the globe rely on ponds, streams and other exposed and untreated sources for their drinking water.

The following restaurants will donate 5 percent of their proceeds from 5 to 9 p.m. (unless otherwise indicated):

–1818 Chophouse in Edwardsville and O’Fallon,

–Tavern on Main in Belleville, and

Dr. Eric Toennies at TriForce Chiropractic in O’Fallon will donate 50 percent of office revenues during the entire day.

The Madison County Board is set to consider $1.37 million in Park Enhancement Program (PEP) grants during meeting tonight (March 20).

The funding come from a 1/10th of one percent sales tax, approved by voters in 2000 under the Illinois Metro-East Park and Recreation District Act and is administered by Madison County Community Development.

Matching shares are required from cities, villages, townships or park districts funds to finance the projects.

Among the items uncovered during renovations, a rare 1849 Steinway square grand piano.

“We couldn’t believe how good it sounded until we heard (Lorkovich) play it,” commented chapel staff person Jeanne Bullard.

A Season for the Child (SfC), the family-oriented live theater season sponsored by the Southern Illinois University Edwardsville Friends of Theater and Dance (FOTAD), will present its second production of the season: “Myth, Mystique & Magic.”

“Myth, Mystique & Magic” will be performed by StagePlay Learning at 2 p.m. Saturday, March 23 in Dunham Hall Theater on the SIUE campus.

Individual tickets are $7 for adults and $5 for children. They may be purchased through the Theater and Dance Box Office at 618-650-2774, and at the door the day of the performance.

“Myth, Mystique & Magic” is an original play created by StagePlay Learning Productions and includes tales of ancient times and far-away lands travel along the spring breeze, looking for a place to land.

The public is invited to attend and be a part of the mystical, magical garden of mythology in this interactive play. Audience members will be encouraged to participate.

SfC, which premiered in 1990, features adaptations of various children’s stories using interactive techniques that not only delight children and parents, but also provide a thorough learning experience.