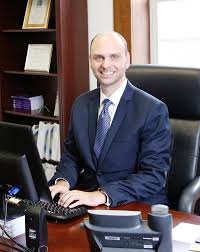 It may not be the pyramids, but federal officials say Southern Illinois Airport’s emerging “High Tech Zone” offers the latest evidence that Little Egypt can be spared from lasting economic decline.

Calling its long-term relationship with the Greater Egypt Regional Planning and Development Commission (GERPDC) a success story, the U.S. Economic Development Administration (EDA) last month issued the latest in a series of grants to help fund the commission’s economic growth and diversification efforts.

One of the oldest federally recognized community economic development (CED) programs in the nation, the GERPDC, established in 1961, has over the years attracted $350 million in private sector investment more than 7,000 jobs, according to EDA.

Important in an area challenged by the long-term decline of coal mining and the uncertainties of the agricultural industry, the agency adds.

The new industrial park was made possible by a 2014 EDA grant of $1.2 million to realign roadway on the Southern Illinois Airport Authority property. Joining the GERPDC and the airport authority as partners in the project were Southern Illinois University, and the Jackson County Growth alliance.

The $210,000 EDA grant, issued to the GERPDC last month, will fund half off the commission’s $420,000 cost for continued economic development activities over the coming fiscal year – including a Comprehensive Economic Development Strategy.  The other half is to be paid by local partner agencies.

GERPDC officials say their 57-year history of partnership with the EDA is remarkable in that the administration’s grants are awarded through a competitive process based upon the application’s merit, the applicant’s eligibility, and the availability of funds.

Monroe launches job training for those with disabilities

Under the new initiative, Waterloo-based Human Support Services (HHS) will make job coaching, educational opportunities and customized training services available to any Madison County employer who hires an individual with a disability, according to HHS Executive Director Anne King.

Known for a wide range of often innovative programs for persons with disabilities, Waterloo-based HSS is a 501(c)(3), not-for-profit offering, among other services, outpatient mental health care, affordable housing assistance, and training in independent living skills.

Building Futures represents the latest in HSS’ vocational services.  Opened last November, Its SeeMore Inn is the first bed ‘n breakfast in Illinois to be staffed entirely by people with disabilities.

Honored for significant job creation and innovation during the meeting were Budnick Converting Inc. and the Midwest Operations division of Sun Basket Inc.

Budnick converts large master rolls of tape (similar in size to rolls of carpet or newsprint) into usable sizes and forms for a variety of industries. Similar services are offered for foam products.  Though based in Columbia, the company now has sales, distribution and converting locations throughout the U.S.; with a joint venture converting company in Monterrey, Mexico.

Sun Basket, Inc. is a San Francisco-based subscription weekly meal delivery service, which assembles and ships members meal kits comprised of fresh organic and sustainable ingredients and recipes, using a “pick to light technology,” according to company literature.  Its Midwest distribution center — one of three around the nation located in Valmeyer’s underground at Rock City Business Complex.

This year’s Madison County Economic Development meeting was held March 21 at the 11 South conference and reception venue in Columbia, Ill.

The MCED is currently at work on a comprehensive economic development plan for the county, the group’s website notes. 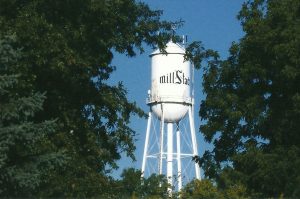 The four will receive a total of more than $2 million in grant funding, provided through the U.S. Department of Energy’s State Energy Program and administered through the IEPA. The recipients must provide matching shares totally $3 million.

The operators of the American Bottoms plant, the Sauget Sanitary Development & Research Association, will receive a $327,671 grant, according to a statement from State Sen. Christopher Belt (D-Cahokia) said.

The four wastewater treatment plants are to use the grant funds to implement energy conservation measures that, collectively, are expected to save some 6,610,374 kilowatt hours of electricity each year, resulting in about $408,000 in savings annually.

Those savings will ultimately be reflected in the bills received by American Bottoms customers, according to State Sen. Belt.

The energy-saving improvements are to be completed by May 2020.

The Illinois Section of the Mathematical Association of America has presented Dr. J. Alan Alewine, a mathematics professor at McKendree University in Lebanon, with its 2019 Distinguished College or University Teaching of Mathematics Award.

The award, presented March 29 at the ISMAA conference at Southern Illinois University Carbondale, is intended to recognize “extraordinarily successful” post-secondary mathematics instructors, according to an association statement. “Recipients are outstanding teachers who foster excitement about mathematics in their own students, and whose influence in teaching has extended well beyond their institution,” the statement explains.

As a state award recipient, Alewine will be nominated for the Mathematical Association of America’s national award in January 2020.

Dr. Alewine is known for creating “a relaxed yet stimulating learning environment to combat students’ fears about mathematics,” according to a statement from Dr. Christine Bahr, McKendree provost and dean.

“He invites every new student in his classes to meet with him in his office at the beginning of the semester so that he can learn their names and ensure that they feel comfortable coming to him when they need help. In addition, he connects with his students by infusing into his courses: popular music, social media, puzzles, games and examples of mathematics in everyday life. In short, he helps students appreciate the joy of mathematics,” Bahr said.

Dr. Alewine has been a full-time member of the McKendree faculty since 2002. For the past four years, he has also served as the associate dean for curriculum.

“It is highly unusual for a faculty member to win all three of these prestigious awards,” said Dr. Bahr,

The Friends of the Old Millstadt Water Tower have reached the halfway point in their fund drive for repainting of the “icon of Millstadt.”

One of only seven metal water towers of its type in Illinois, the tower was recognized in 2014 as one of Landmarks Illinois’ “Ten Most Endangered Historic Places.”

In its prime, the tower was considered “one of the most beautiful spots in St. Clair County,” according to the group’s website.

Once an important navigation aid for pilots approaching Scott Air Force Base, the tower for years was topped with directional light that could be seen in Waterloo or from St. Louis river bridges.

Built in 1931, the 100,000-gallon steel tower has not been used since 1991, but remains structurally sound, according to an engineering study provided without charge by Ox2 Engineers.

However, without repainting the tower faces demolition in the not-too-distant future, restorationist say.

Fundraising efforts have so far included a soup supper, a bowl-a-thon thon, raffle and a series of trivia contests. The group is even recycling toner cartridges.

Mariachi’s Mexican Cantina in Millstadt, on request by diners, will donate a portion of proceeds to the water tower project on Wednesday, May 15, from 4 to 9 p.m.

The Second Annual Millstadt Tin Man Half Marathon and 5K is set for June 1 (see https://millstadttinmanhalfmarathonand5krun.itsyourrace.com). For more information on the project of other fundraisers, see the Millstadt Water Tower website (www.millstadtwatertower.org)