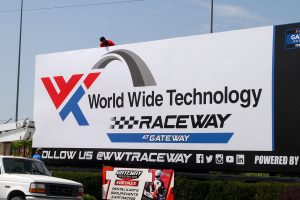 The new center will ultimately employ some 2,000 technicians, most being transferred from WWT’s present, two-year-old facility in nearby Lakeview Commerce Center. About 500 new workers will employed for the new facility.

The lease for the new tech center alone represents perhaps the biggest industrial real estate transaction in St. Louis history, according to the commercial realtor CBRE, which helped broker the deal.

In addition to an advertising vehicle, WWT plans to use the Metro East racing complex as tech proving ground and a base for community outreach programs.

The track hosts NASCAR, INDYCAR and NHRA professional racing events as well as an extensive schedule of programs for amateur racers.

Its highly popular Midnight Madness events have been known to draw thousands of area teenagers and young adults, seeking an alternative to street racing.

Opened as  St. Louis Raceway Park in 1967 as a local drag strip, Gateway was purchased in 1995 by the promoters of California’s fabled Long Beach Grand Prix —one of the nation’s most popular auto races – and transformed into a big-league racing venue. Key to the transformation was a multi-million-dollar deferred-payment bond issue, guaranteed by the State of Illinois.

In 2010 Maryland-based Dover Motorsports, Inc., which had purchased the facility a few years earlier, closed the track citing tax burden and insufficient revenues.

In 2012, Ladue, Mo.-based real estate developer and auto racer Curtis Francois reopened the track with a series of successful events.

Healthcare will be her major campaign theme, Londrigan emphasized during a kickoff event, April 11.

She is expected to again enjoy substantial labor union support.

Londrigan won the 2018 Democratic primary in the district; garnering 45.7 % of the vote in a five-way race against a college professor Jonathan Ebel of Urbana, physician David Gill of Bloomington, former Illinois Assistant Attorney General Erik Jones of Edwardsville, and teacher Angel Sides of Springfield.

The Democratic Congressional Campaign Committee has repeatedly targeted the district.

Nevertheless, Rep. Davis is now in his fourth term.

The district stretches across the mid-Illinois, taking in Springfield, Champaign and Bloomington, and a small portion of Madison County including Edwardsville

Homes sales were up, month over month, in all but one Metro East county during March, according to the Realtor Association of Southwestern Illinois. 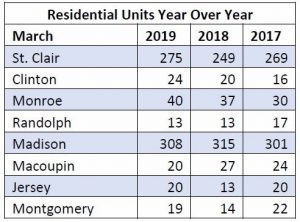 Metro East region home sales for March over the past three years.
(Courtesy of Realtor Association of Southwestern Ill.)

In Randolph and Macoupin County, home sales rose 18.2 and 11.1% respectively.

In Montgomery County, sales were flat.

While inclement weather may have depressed sales levels during February, favorable year-over-year data in March suggests the residential real estate market across Metro East may genuinely be trending upward.

In St. Clair and Madison counties, home prices were up 4.3 and 4.1 percent, respectively, in March compared with the same month last year.

Homes continue to sell faster this year in many parts of the Metro East. In Madison County, homes were on the market 11.7 percent fewer days before sale than in March 2018.  In Jersey, Clinton, and Macoupin Counties homes sold 34.9, 24.8, and 16.3 percent faster.

Home ownership continues to be more affordable in the Midwest than in other geographic regions of the nation, according to the National Association of Realtors Home Affordability Index.

“With the Midwest being so affordable for home buyers and the Metro East being so centrally located to so many amenities, it’s a great place to live,” said Judy Ross, president of the Realtor Association of Southwestern Illinois.

The Realtor Association of Southwestern Illinois can be reached at www.618realtor.com or (618) 277-1980 or Membership@myRASI.com.

When opened later this year, the 20,000-square-foot, state-of-the-art water treatment facility, at 9535 Collinsville Road, will process up to five million gallons of water per day, according to officials.

Funding for the project will be paid for by a rate increase which was approved by the Collinsville City Council in 2014.

Development of the pre-cast concrete facility – including test labs and offices – is slightly ahead of schedule, city documents indicate. Construction was originally scheduled for completion this summer.

The new plant is tentative expected to come online in September.

The new facility was designed by Hurst-Rosche Engineers, Inc. of Hillsboro and constructed by Korte & Luitjohan Contractors, Inc. of Highland.

Illinois Route 157 to be closed for work

The Illinois Department of Transportation (IDOT) plans to close Illinois Route 157 at Silver Creek near Hamel starting Wednesday, May 1.

No timetable for reopening has been announced.

The contractor on this project is Baxmeyer Construction Inc., of Waterloo.

Madison County is offering grants to communities looking to energize their parks through solar power.

Community Development is announcing the availability of its new grant program, Solar Park Grant. The program, which is being funded by the U.S. Department of Energy, is designed to assist park districts and municipal parks and recreation departments within the county to develop and enhance parks through solar power.

“This grant is yet another opportunity to make improvements to parks within Madison County, while also being energy efficient”, Community Development Administrator Trudy Bodenbach said.

The grant will provide funding to solarize items such as restrooms, pavilions, scoreboards, lighting, etc.

The number of applicants and the funding request for each will determine the total number of grants awarded. The maximum amount that can be applied for is $50,000.

The grant application period is now open and eligible applicants include park districts and municipal park and recreation departments. Applications will be due no later than June 12.

There will be a scoring process and the Grants Committee will select the recipients based on the project ratings.

Contact Community Development Coordinator James Arnold at 618-296-4247 with questions about the grant.