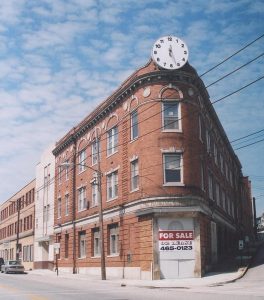 The Wedge Bank Building is one of the properties included in the long-term Downtown Alton revitalization plan unveiled May 7.  (Photo courtesy of Alton Main Street)

Alton would become the “Healthiest and Happiest City on the Mississippi River” by 2029, under a comprehensive, long-term Downtown revitalization plan, unveiled last week by millionaire attorney John Simmons and wife, Jayne.

In all, dozens of properties, many of them local landmarks, have been purchased over recent years by the Simmonses, who now plan to spend millions of dollars redeveloping them.

The redevelopment area extends along the city’s Mississippi riverfront corridor from Ridge Street to State Street.

A grand reopening for the Grand Theater — the site of extensive renovations over the past year — has already been set for Dec. 1; in time to mark the theater’s 100th anniversary.

Work on the Jacoby Center, as well as the city’s Pocket Park, Wedge and Elfgen buildings, the building occupied by LuciAnna’s Pastries on Broadway, and other sites is scheduled to begin late this year.

Renovation of the Millers Mutual building on East Fourth Street has been underway since 2017.  First Mid Bank & Trust last week confirmed plans to open a branch in the building.

Property acquisition and renovations are being conducted by Giant City Properties, which was formed by the Simmonses specifically to undertake the downtown revitalization project.

Extensive public input will be sought, the Simmonses say. Community engagement opportunities will be offered this summer.  A website, social media, other interactive media, and a storefront office, are also planned.

The ambitious program was formally announced by the couple during a “What’s Up Downtown” meeting, sponsored by the city’s downtown merchants association, May 6, at the Jacoby and outlined for the Alton City Council during their May 8 meeting.

The St. Louis area is among 40 metropolitan areas being considered by the Federal Communications Commission (FCC) for early introduction of “Next Gen TV” — an advanced broadcast television service promising improved picture quality, greater resistant to interference, and interactive features, as well as localized advertising and emergency alerts. 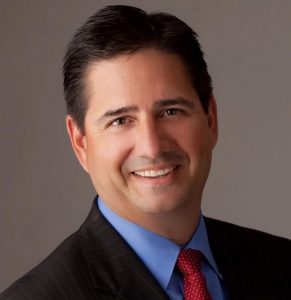 Transitions to Next Gen from the present digital format would be accomplished gradually over a five-year period, according to the FCC.

The television industry sees Next Gen as way of recapturing viewers and advertising lost to the Internet by effectively incorporating Internet-type content into broadcast television.

Industry leaders believe the new service will prove popular with the nation’s growing legion of “cord cutters” who are cancelling to cable television service and receiving television programs online.

And critics note Next Gen will eventually force many households to, once again, purchase new televisions.

The FFC announced its list of possible early Next Gen markets comes a decade after U.S. terrestrial television broadcasting switched from analog to digital signals in June 2009.

Test broadcasting of Next Gen. TV is already underway in Phoenix.

The commission has not yet announced if it plans assistance to ease the transition, such as the no-cost digital converters offered during the 2009 conversion.

License plate readers to be installed across Madison County

Madison County is in the process of installing license-plate-reading cameras along major roadways countywide, State’s Attorney Tom Gibbons told the County Board’s Judiciary Committee on May 3.

The cameras are used to spot vehicles which are stolen or linked in law enforcement data systems to serious crimes, according to county officials. 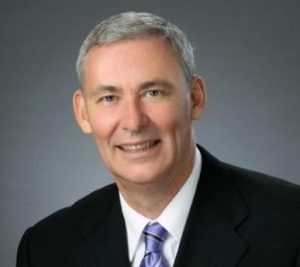 An initial set of cameras, placed on the Clark Bridge in 2018, have not only proven effective in alerting law enforcement officers to stolen vehicles — which police say are commonly transported across the Mississippi River from Missouri to Illinois — but, in one case, helping officers apprehend a murder suspect, Gibbons says.

Officials are reluctant to disclose exactly how many license plate readers are currently in place, how many they ultimately plan to have, or where they will be located.

The cameras and related information technology infrastructure are provided at no charge under a federal program by the U.S. Drug Enforcement Association.

The projected $50,000 installation and monitoring cost for the new cameras this year will be covered out of county drug forfeiture funds, according to the state’s attorney’s office.

The license-plate-reading cameras are not used for routine traffic law enforcement, police say.

Jerry Costello II of Smithton has been appointed director of law enforcement for the Illinois Department of Natural Resources (IDNR).

Costello, a Democrat, who had represented the 116th district in the Illinois House of Representatives since 2011, resigned from his legislative seat, last week, on receiving formal notification of his IDNR appointment by Gov. J.B. Pritzker.

In his new position, Costello will be charged with leading efforts to ensure the safety of those in Illinois State Parks and other IDNR facilities.

He had been chairman of the House Agriculture and Conservation Committee.

A graduate of Southern Illinois University Carbondale, Costello is a U.S. Army veteran who served in Operation Desert Storm and a former assistant chief of police.

He and wife Lori have three children.

Thirty-year Metro East political figure Mark Von Nida has announced he will not seek re-election as Madison County Circuit Clerk in 2020; opting instead to lead what he hopes will be a revitalization of the county’s Democratic Party.

Von Nida was appointed to county clerk’s office in 1997 and subsequently re-elected four times. As clerk, he developed a reputation for innovation; including a “ballot defect detection” system, which was ultimately adopted across the state. A device, developed and patented by Von Nida to ensure secrecy when paper ballots are read by electronic tabulators, is now likewise licensed for use by other election officials – with royals going to the treasury of Madison County.

He says he now wants to help Democrats “reconnect” with county voters.

“We are just getting started,” now appears as a slogan on the county’s Facebook page.