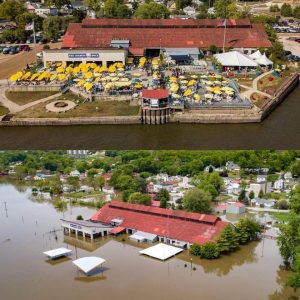 “The water is receding and the sun is shining. Better days to come!” Mayor Rick Eberlin posted to Facebook, as Mississippi River waters fell below the critical 29-foot, major flood stage in Grafton, Thursday, May 16.

Metro East towns along the Mississippi River over the past two weeks have seen some of the highest flood waters since the Great Flood of 1993, according to National Weather Service (NWS) data.

Grafton, at the confluence of the Missouri and Mississippi rivers, is believed to be the site of the worst damage, with water reportedly surrounding many of the town’s riverside tourism attractions.

River level in Grafton peaked at 31.36 feet on May 10. The record depth for flood water in the community is 38.2 feet. Forecasters hope to see waters in the town drop below the moderate flood level of 24 feet by about May 26-27. However, a firm prediction for return to below-flood-stage of 21 feet, had not yet been issues as the Chronicle’s deadline.

Downstream in Alton — where the city’s temporary Muscle-Wall-and-concrete-barrier dyke system successfully protect downtown during an open-air street festival — the river level peaked at 33.17 feet on May 10; just short of the area’s 34-foot major flood threshold.  Waters were project to fall to the moderate flood level of 29 feet early this week and fall below the flood stage of 21 feet by the end of the month.

Some 34 Illinois counties along the Mississippi and Illinois rivers, have been declared disaster areas, including the Metro East area counties of Jersey, Madison, Monroe, Randolph, and St. Clair.

However, Illinois must first document a total of $19.2 million in flood damage statewide, and counties must meet a threshold of $3.56 times the county’s population. The programs apply only to uninsured property.

Real estate owners who sustain flood damage can apply for a Disaster Area Application for Reassessment, by obtaining a Form PTAX-245 from their county assessor’s office.

Taxpayers in counties covered by the disaster declaration may request waivers of penalties and interest on state income taxes, withholding taxes, sales taxes and specialty and excise taxes, if they cannot file their returns or make payments on time.

Despite posts, reformer remains on L&C board

David Heyen remains chair of the Lewis and Clark College (L&C) Board of Trustees following the failure of a motion calling for his resignation at the board’s May 14 meeting.

“Anyone notice that there is no terrorism in Iceland or Japan? Weird coincidence, there are no Muslims there either,” read one of the posts.  “Mohamed owned many slaves. Robert E. Lee was against slavery. So why are we tearing down statues instead of mosques?” read another.

Calls for Heyen’s resignation came last week from the Missouri chapter of the Council on American-Islamic Relations (CAIR), the L&C Faculty Association, a group known as the Alton Coalition of Concerned citizens, the Progressive Jews of St. Louis, and Alton Main Street Board President Sasha Bassett, acting as an individual.

“I am relatively new to the concept of social media,” Heyen said in statement to KSDK-TV in St. Louis. “This is now being used as a distraction by a small faction of people who are not happy that I have asked tough questions as a trustee.”

Heyen, who has served on the L&C board since 2017, has frequently called for greater fiscal restraint at the college; citing a reported $130 million in long-term debt.

He became board chair last month, with the support of a new slate of fiscally conservative board members, elected April 2.

Heyen actively campaigned for new board members Julie Johnson, Charles Hanfelder and Kevin Rust — who ran under the banner, “Candidates for Accountability.”

A non-binding resolution for Heyen’s resignation failed on a 4-3 vote — with Heyen, Johnson, Hanfelder, and Rust all voting against the measure; and mid-term board members Dwight Werts, Brenda McCain and Bob Watson all voting for it.

L&C College last week issues at statement saying the posts would be investigated in line with normal college policies.  Results of the investigation have not yet been announced.

Lindenwood U. cuts back Belleville operations 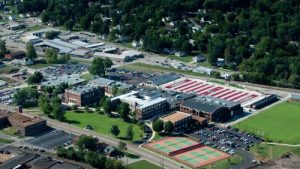 St. Charles, Missouri-based Lindenwood University has announced it will cease offering traditional daytime undergraduate courses at its Belleville campus at the end of the 2019-2020 school year.

Graduate school courses and nighttime accelerated-learning classes will still be offered at the Lindenwood-Belleville campus, the university said in a May 14 announcement.

All undergraduate students attending the Belleville campus will be able to complete their degrees at the St. Charles campus with all scholarship packages intact, administrators emphasized in the announcement.

The Lindenwood Board of Trustees cited “ongoing financial and enrollment challenges.”

Founded in 1827, Lindenwood University is a private liberal arts university, which has been offering courses in Belleville since 2001.

In 2003, Lindenwood acquired the former Belleville Township High School campus, which has since served as a site for accelerated evening and graduate programs. Undergraduate programs, athletic programs and full-service residential facilities were added in 2009.

Bill Haine of Alton has been appointed to the Illinois State Board of Elections.

Haine served in Illinois Senate from 2002-2018, representing the 56th District.

An attorney by trade, he clerked for the Illinois Appellate Court and practiced law before entering elected office.

Haine received his Juris Doctor from the Saint Louis University School of Law.

He will serve as director-at large for the Gateway PGA; one of 41 sections of the PGA of America. The Gateway organizations is comprised of more than 335 golf professionals at over 200 facilities in eastern and central Missouri and southern Illinois.

Hightower was superintendent of the Edwardsville School District 7 for 19 years, beginning in 1996, and was the district’s first black superintendent.

An NCAA basketball referee for 36 years, he officiated during 12 Final Four tournaments.