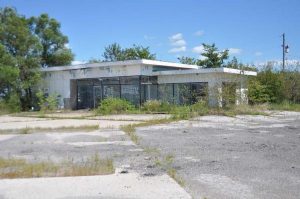 Much of Metro East’s considerable inventory of abandoned commercial and industrial land could be redeveloped through better utilization of federal Brownfield Grants, according to speakers scheduled for the “Resources for Revitalizing Your Community Workshop,” Aug. 6, at the Shrine Restaurant in Belleville.

“Brownfield sites” are defined by the U.S. Environmental Protection Agency (EPA) as real property, the expansion, redevelopment, or reuse of which may be complicated by the presence or potential presence of a hazardous substance, pollutant, or contaminant.

EPA’s Brownfields Program provides a range of grants and technical assistance to communities, states, tribes and other entities to assess, safely clean up and sustainably reuse contaminated properties.

Grants are available not only to test for contamination and undertake remediation, but even plant reclaimed sites with greenery and train employees for new businesses at the sites.

Additional assistance to put previously contaminated properties back into productive use is available under the EPA’s Land Revitalization Program.

However, those programs are not well known and often understood, the EPA acknowledges.

This week’s free workshop is a project of the Technical Assistance to Brownfields program at Kansas State University, which has been contracted by EPA to provide educational workshops on its Brownfield redevelopment assistance.

Madison County has already received a $300,000 EPA grant to conduct a comprehensive, county-wide inventory of potential brownfield sites. The county will inventory, characterize, assess, and, if appropriate, conduct cleanup planning on priority sites. Funds are also being used for public outreach and community involvement projects.

Seventeen Madison County sites have already been certified as brownfields, according to a new online Interactive Brownfield Locator, maintained by the EPA.

While admission is free, pre-registration is encouraged to ensure space and a complimentary lunch.

A wide range of brownfield information, including the Interactive Brownfield Locator, is accessible on KSA TAB website (www.ksutab.org).

For additional information, contact Sheree Walsh with Kansas State University at chsr@ksu.edu or 785-532-6519.

The Federal Emergency Management Agency is now giving Illinois until Sept. 3 to report cost for damage recovery and protective measures, associated with severe storms and near-record flooding that occurred from February to July.

FEMA administrator will consider the damage reports in determining whether Illinois qualified for a major disaster declaration and federal assistance to help cover reported cost.

The flood damage reports were originally due into FEMA on Aug. 2. However, the Illinois Emergency Management Agency (IEMA) was granted a deadline extension last week.

“In some parts of the state, floodwaters remain an impediment not only to residents but also emergency managers and first responders,” said Alicia Tate-Nadeau, Acting IEMA Director. “We are just beginning our joint damage assessments with FEMA and the U.S. Small Business Administration and need more time to thoroughly review the information in order to better define the true impact of the event.”

FEMA and IEMA began reviewing flood and storm-related costs with local government officials in 30 counties on July 29.  The teams will begin assessing damage to homes and businesses around August 12.

In addition to documenting response and recovery costs and numbers of structures damaged, the assessment teams will also look for other disaster-related impacts that could impede a community’s ability to recover, including displacement of residents, the economic effects of road closures on businesses and workers and concerns in areas that have been hit by floods twice in less than a year.

Due to the extensive geographic region involved and continuing disruption along key transportation thoroughfares, the assessment process is expected to last several weeks.

For updates on the current flood operation, visit the Ready Illinois website at www.ready.illinois.gov.

Team Illinois Youth Police Camp, which meets on the campus of Southern Illinois University Edwardsville, had its largest graduating class this year. 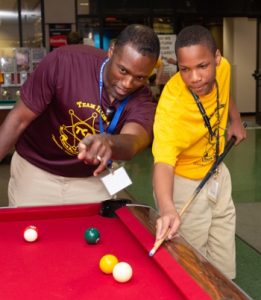 The 15th annual residency program was held from July 14- 20. The camp offers guidance and support to youth, ages 13-17, who are under many societal pressures.

It is coordinated by the Illinois State Police (ISP) and hosted in partnership with SIUE Police and other Metro East agencies. Forty officers participated in the weeklong camp.

“The camp is military structured, with no technology or electronics for the whole week,” continued Dye. “We told the young people that we understand this camp is hard, but life is hard. You have to be able to meet challenges and persevere in the face of obstacles.”

The camp consisted of classes and fun activities, according to the trooper. Some topics covered included:

“I’ve been involved with the Youth Camp for the past 15 years, and it has a positive effect on

many,” noted Dye. “It’s rewarding when I’m out and hear someone call my name, and I have no idea who they are. Then they say they went to the camp, and I see them working on a good job, or they tell me they are doing well in life.”

“Over the past 15 years, several kids have gone on to graduate from SIUE,” said Dye. “For many of the youth, SIUE is the first college campus they have visited. We also have students who have graduated from other colleges and universities, and who have gone through the military.”

Proposed bridge and interchange improvements at the intersection of Interstate 64 and Illinois Route 111 in Washington Park will be the subject of an Aug. 8 public information meeting conducted by the Illinois Department of Transportation (IDOT).

The bridge has long drawn criticism for confusing lane configurations and an Interstate off-ramp that, critics say, can place vehicles exiting eastbound I-64 in the path of southbound Ill. Route 111 motorists, coming over the crest of the bridge.

IDOT will both share information and receive public input about the project, which is intended to improve the operations and safety the interchange and bridge, according to agency officials.

Handouts and display boards will be available for public review. Information regarding engineering, land acquisition and environmental issues will also be available, according to IDOT.  Representatives from IDOT and consultants, Hanson Professional Services Inc. will be available to discuss the project and answer questions.

The meeting will be an open house format, with no formal presentation.

Comment forms will be provided at the meeting; however, the public can also mail or fax comments directly to 1102 Eastport Plaza Drive, Collinsville, IL 62234 or e-mail Matthew.Meyer@illinois.gov on or before Aug. 23.

Madison County is again asking the public to help identify the priority needs of low-income families, households and neighborhoods.

Survey results will be used to establish goals for both the Community Development Block Grant (CDBG) and HOME programs.

The 2019 Madison County Community Development Community Needs Survey will be used to develop the agency’s 2020-2024 Consolidated Plan, which will largely establish the agency’s goals and priorities for funded projects over the next five years.

The strategic plan prioritizes the allocation of federal Community Development Block Grant and HOME funds that the county agency administers on behalf of the U.S. Department of Housing and Urban Development. Funding priorities are primarily based on community input gathered through the survey and other activities specified under a formal planning process, agency officials say.

The survey is being conducted in line with HUD regulations, which require the MCCD to conduct a needs assessment by soliciting the opinions of the county’s residents, business owners, service providers, public officials and the public.

The MCCD has utilized similar surveys in the past.

To participate in the survey, visit Survey Monkey at https://www.surveymonkey.com/r/MCCDCommunityNeedSurvey  complete the survey.

For questions regarding the survey, or to request a paper survey, contact Lisa Mersinger at 618-296-4398 or e-mail lmmersinger@co.madison.il.us