Funds for the Bicycle Path Grant Program, administered by Illinois Department of Natural Resources (IDNR), are for the acquisition of land or development of facilities for bicycle paths.

For this round of grants, a total of 17 applications were received, representing a combined request of $2.7 million. Combined with previous years’ funding, IDNR has awarded grants that have helped develop nearly 1,000 miles of local government bicycle trails in Illinois since 1990.

A list of this year’s Bicycle Path grants, grant recipients, and project information is below:

Madison County Transit – Troy Trail (Madison County), $191,000, to construct a .8-mile trail at Spring Valley Road and west to Formosa Road. This will connect to the MCT Bus Stop and Park and Ride lot (used as trailheads) at South Main Street and the west terminus is at Formosa Road.

The Emergency Telephone System Board voted to pay $630,927 in reimbursement costs for the period of Jan. 1 to June 30. In May, the ETSB approved the bi-annual reimbursement rate of $13 per call.

There are currently 15 PSAPs, which includes a line at the 911 office. The submitted consolidation plan, which is state mandated, will bring the number to eight.

The board determined the reimbursement rate after conducting a study on the average time spent answering 911 calls by a telecommunicator. The reimbursement will be paid from the monies it receives from its 911 emergency telephone surcharge, which is around $3.6 million annually.

The reimbursements to be paid for the number of calls to the municipalities are:

The County Board will vote Aug. 21 on the reimbursement rates.

A fast-spreading invasive insect species — now found in Metro East — poses a serious threat one of the area’s most popular trees, according to Lewis and Clark Community College’s National Great Rivers Research and Education Center (NGRREC). 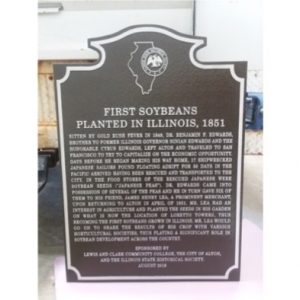 Researchers and the U.S. Army Corps of Engineers (USACE) are meeting this week on strategy to combat the emerald ash borer in Southwestern Illinois.

“Emerald ash borer is a forest pest, found throughout the eastern U.S., but was recently detected in the Riverbend area on USACE Rivers Project property,” said USACE Biologist Brian Stoff, who will present the seminar. “With green ash being one of the most abundant tree species in the Mississippi River floodplain, the USACE foresters and biologists are working to determine the best course of action.”

The emerald ash borer (EAB), is an exotic beetle, native to Asia, that was first discovered in the U.S., in southeastern Michigan, near Detroit, during the summer of 2002.

Adult beetles nibble on ash foliage but cause little damage.

However, EAB larvae (beetles in an immature stage) feed on the inner bark of ash trees, disrupting the tree’s ability to transport water and nutrients.

As of October 2018, it was found in 35 states, and the Canadian provinces of Ontario, Quebec, New Brunswick, Nova Scotia and Manitoba.

Since its discovery in the U.S, the beetle has killed hundreds of millions of ash trees in North America, according to the Ash Borer Information Network, a collation of government agencies and universities formed to disseminate information about the pest.

In the process, it has cost municipalities, property owners, nursery operators and forest products industries hundreds of millions of dollars, the organization says.

It has prompted regulatory agencies, including the U.S. Department of Agriculture, to enforce quarantines and levy fines to prevent potentially infested ash trees, logs or hardwood firewood from moving out of areas where EABs are found.

In Minnesota, officials are concerned that tree loss could be so severe that heavily forested riverside areas could be turned to bogs.

Madison County officials are seeking a natural disaster declaration after two bands of heavy rainstorms, Aug. 12-13, dumped up to nine inches of rain on the Granite City area; flooding streets, homes, and businesses.

Homeowners and businesses can report flood damage and request assistance through the United Way’s 2-1-1 telephone number and 211.org website; 24 hours a day, seven days a week.

The American Red Cross and other non-profit organizations will assist with cleanup or other aid at reported flood sites, according to county officials.

Special trash bins have been placed at the Chouteau, Nameoki, and Venice Township Highway Department buildings for disposal, at no cost, of larges items, such as furniture, damaged during the flooding.

Flooding is a recurring problem in the Granite City area, which lies at one of the lowest points in the American Bottoms floodplain.

Another factor, Madison County officials acknowledge, was a large, newly installed pump at the Chouteau/Nameoki /Venice pump station, which the U.S. Army Corps of Engineers had not turned on until the second day of the rain.

The flooding came just after Gov. J.D. Pritzker, on Aug. 9, signed legislation that will effectively remove Adler as MESD executive director, for not living in the district, an appoint Hagnauer to the MESD board.

At the height of the flooding, the Granite City Police Department requested the public not to drive on inundated city streets. The department ceased responding to non-emergency calls; noting patrol cars could no longer traverse flooded roadways.

The police department’s Humvee was used to respond to emergencies.

About a dozen vehicles were stalled in floodwater around the city. Waves caused by vehicles on flooded streets pushed additional water into homes and businesses, the department noted

Some 1,000 homes were affected by high water — many not covered by flood insurance, county officials say. A disaster declaration could bring government assistance.

The rains delayed the opening of Granite City Schools by a week and forced closure of  U.S. Steel’s Granite City Works. However, the company emphasized there were no injuries or damage at the plant.

Fairmont Park cancelled its Aug. 13 live racing program and closed its off-track better parlor on both Aug. 12 and 13.  The park’s satellite off-track betting facilities in Alton and on Illinois Route 3 remained open.

The Illinois Department of Transportation (IDOT) closed U.S. Highway 50, at Silver Creek, from Reider Road to Belleville Street, just west of Lebanon, overnight, due to water on the pavement.

In Alton, city officials closed Riverview Drive, just west of Riverview Park, due to cracks in a retaining wall.

Additional flooding was reported on at least one roadway near Greenville.

One southbound lane reopened just before 5 a.m. the following day; but a detour remains in place. The department has not indicated why the treatment, applied by Micro-Surfacing Contractors, Inc. of St. Louis, failed to cure.

Lewis and Clark Community College (LCCC), the City of Alton, and the Illinois State Historical Society promise to reveal little-known history, this Friday, during the dedication of an official state marker on the site where soybeans were first planted in Illinois, back in April 1851.

The introduction of soybeans — today one of Illinois’ most important cash crops — is a surprisingly complex tale, according to LCCC President Dale Chapman.

It involves the 1849 Gold Rush, an Alton medical doctor, 17 shipwrecked Japanese sailors who were rescued after 50 days adrift in the Pacific, and an unbroken chain of custody of Japanese Peas that made their way back to Alton, to become the first soybeans grown in Illinois.

Illinois is today the number one soybean producing state, a title it has held now for five straight years, according to the Illinois Soybean Association. Prairie State farmers produced some 611.9 million bushels of soybeans in 2017. The bean rank second only to corn as the state’s top crop, according to U.S. Department of Agriculture data.

The commemorative event is set for Friday, Aug. 23, at 2 p.m. at 417 Prospect St., in Alton. It is free and open to the public. However, reservations in advance are recommended.  Contact LCCC Executive Secretary Sue Keener at skeener@lc.edu or 618-468-2001.

Madison County will formally thank government entities and nonprofits that responded to, or worked to prevent, spring Mississippi River flooding, according to County Board Chairman Kurt Prenzler.

“The support and partnership between all involved decreased the flood threats and prevented a real disaster. This flood was the second highest on record and it cost county municipalities and agencies in Madison County more than $24.8 million to fight,”Prenzler said.