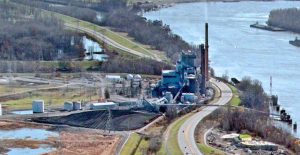 An innovative environmental remediation process, developed by a St. Louis County firm, is promising to help bring new life to the site of the shuttered Wood River Power Station in East Alton.

Commercial Liability Partners (CLP), on Sept. 13, announced the acquisition of the retired, coal-fired power plant from Houston-based Dynegy, Inc. Terms of the sale were undisclosed.

Meetings with stakeholders in East Alton on redevelopment of the site are anticipated over the coming weeks; as talks with the Illinois Environmental Protection Agency (IEPA) on remediation objectives and timeframes.

Redevelopment of the site will involve a host of environmental issues, including  remediation, groundwater monitoring, abatement, decommissioning and demolition of the facility and surrounding coal ash ponds, according to the company.

Coal ash is the byproduct left behind when coal is burned to produce power.  It contains harmful heavy metals such as mercury and arsenic that can seep into groundwater. In many cases, coal ash is placed in unlined pits, where it remains long after power plants are closed.

The Wood River Power Plant ranked 90th on a list of the nation’s most polluted power station sites, compiled in 2009 by the Institute of Southern Studies. As of 2006, It had some 267,066 pounds of coal combustion waste in surface impoundments, according to the institute.

The Wood River Station’s east ash pond made the U.S. Environmental Protection Agency’s 2009 list of “Coal Combustion Residue (CCR) Surface Impoundments with High Hazard Potential Ratings.” The list identifies sites at which a dam failures would most likely cause loss of human life; although it does not address the likelihood of such events.

A niche development firm specializing in “underutilized, distressed, or environmentally-challenged properties,” CLP has conducted major industrial reclamation projects in at least seven other locations around the nation, according to the company’s website.

In August of last year, CLP was issued a patent for a proprietary impoundment closure system; which the company says is superior to methodologies normally used to seal off, or otherwise remediate, coal ash ponds.

The CLP technique involves the placing of a low permeability membrane on top of waste materials with ponded water on top.

“We look forward to working with local officials and the Illinois EPA to discuss plans and timelines for environmental remediation, and ultimately the redevelopment potential at the site,” Ron Froh, CEO and president of CLP, said in a prepared statement.

Health care practitioners and other licensed professionals, who serve-on or have spouses at U.S. military bases in Illinois, will soon find it easier to provide serves to the local civilian population.

That will help many military spouses secure civilian employment and a second income for their households, according to Mike Riley, chairman of the Leadership Council Southwestern Illinois Public Policy Committee.

“In today’s two household income families, it is critical for military members and spouses to be able to expedite the transfer of their professional licenses to gain employment, because it often takes upwards of 24 months for military spouses to find work .Considering many spouses are only at a military base for 2-3 years, difficulty in gaining sustainable employment for spouses has been a significant reason why many military members leave the service early,” said Riley.

Over the long run, it will also encourage doctors, dentists and other professionals on Illinois military installations to establish practices here, after they retire from the service. Backers of the legislation note military personnel often settle down near the bases where they were last assigned.

With many rural and urban areas of Southern Illinois experiencing healthcare provider shortages, the new law could be a boon to civilian populations as well.

The new law applies to all full time, active duty military servicemembers and their spouses; as well as members of the U.S. Coast Guard, National Guard, and reservists.

The new law will take effect in January 2020.

The dried grains are already being fed to hogs, dairy and beef cattle, and poultry; as the result of previous NCERC research that established the value of DDGS as livestock feed.

Research over the past decade, in the U.S. and abroad, has shown potential for GGDS in aquaculture.  With fish production increasing, and costs for traditional feed increasing or unstable, hatcheries are seeking alternative feed sources.

However, DDGS have yet to really catch on as a commercial aquafeed, the SIUE researchers note.

Based on the project’s results, the center then plans to launch a marketing campaign for DDGS aquafeed; utilizing Illinois Corn Marketing Board funds.

The SIUC center is considered a world-class research facility for both freshwater and marine sciences. 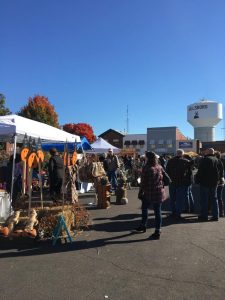 Sustainable aviation fuel (SAF) is a key factor in a Boeing plan to reduce the growth of aircraft carbon dioxide emissions by 2020, and cut them to half of what they were in 2005 by 2050, according to a presentation by Joe Ellsworth, the company’s regional director of environmental strategy and integration, at the university in late August.

Some types of SAF perform better than the Jet A and Jet A-1 fuels that are now used in aviation, Ellsworth said, because they have higher energy density, so less fuel is needed.

SAFs also offer the potential advantage of a more diversified supply chain, as they can be produced from a range of substances including: food and non-food crops,  municipal solid waste, cellulosic waste, used cooking oil, halophytes, and algae.

A Competitive Build will allow teams of skilled tradesmen to compete for prizes up to $1,000 using only provided materials such as wood, chicken wire, pool noodles, and used clothes. A $25 entry fee is required with teams limited to three members.

A free Fun Family Build competition will allow teams of up to four —with at least one adult and one child — to construct structures from provided precut materials. Non-cash prizes are offered.

Pre-registration is required. The deadline is Wednesday, Oct. 2. Register online at  www.hillsboromonster.com. For more information on the Harvest Market visit Imagine Hillsboro on Facebook.