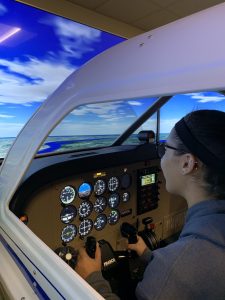 An estimated 120 female high school students from across the St. Louis area participated in Girls in Aviation Day, Oct. 4, at St. Louis Downtown Airport in Cahokia.

Saint Louis University’s Parks College of Engineering, Aviation and Technology partnered with Women in Aviation International (WAI) to host the event to introduce the students to the aviation industry and related career opportunities.

The event included hands-on activities — including time in flight simulators and the opportunity to climb into the cockpits of various aircraft — a well as a panel of aviation professionals and current St. Louis University (SLU) aviation students.

A career expo featured representatives from companies such as AeroNav Data, Gulfstream, Ideal Aviation, Take Flight Girls, Inc. and the Greater St. Louis Business Aviation Association (GLSBAA) who were on hand to talk about various job opportunities at their organizations and the paths to such positions.

The local participants were among an estimated 20,000 girls worldwide taking part in Girls in Aviation Day 2019.

Over the past two decades, the number of women involved in the aviation industry has steadily increased, and women can now be found in nearly every aviation occupation, the WAI reports.

However, their numbers are still small by comparison, according to the WAI. For example, women pilots continue to represent just six percent of the total pilot population.

Gov. J.B. Pritzker wants the Illinois General Assembly to consider consolidation of the state’s 649 downstate and suburban, municipal fire and pension plans, when lawmakers convene for a veto session Oct. 28.

The governor’s Pension Consolidation Feasibility Task Force, Oct. 10, issued a report recommending the consolidation of most local police and fire pension plan assets into two new statewide systems. The move could help stabilize the retirement plans by generating as much as $1 million a day in additional returns, according to the report.

The city’s fire pension board requested the action earlier this year, under the terms of a new state law, to pay $2.2 million owed by the city to pension fund.

While not yet publicly commenting on rumors of pending bankruptcy, city officials say the fund diversion could seriously hamper the town’s ability to provide services – including police and fire protection.  The city already has a $5.5 million budget deficit.

East St. Louis is among numerous Metro East cities — including Alton and Belleville — that have underfunded fire and police pension plans, according to state records.

However, the Illinois Public Pension Fund Association and Illinois Fraternal Order of Police are critical of task force report.

A timetable laid out in the report anticipates a law authorizing the consolidation will take effect July 1. The actual consolidation would be completed by July 1, 2023.

The conference is one of the nation’s most important annual gatherings of transportation-related government and commercial organizations.

The meeting came amid growing speculation that the federal government may further centralize planning for the nation’s transportation system.

Without stabilized funding for the U.S. Department of Transportation’s (USDOT) Highway Trust Fund, federal highway funding will be cut by 51 percent and the federal transit program by 100 percent in fiscal year 2021, according to the AASHTO.

It is central to an ambitious array of infrastructure improvements proposed by the Illinois Department of Transportation (IDOT) across the state — including highway, bridge and water projects across Metro East.

Planning is far enough along that state transportation officials are asking the Federal Communications Commission to ensure the availability of the 5.9GHz radio spectrum for guidance and intervehicle communication purposes.

Complementing the conference’s update on the proposed development of a hyperloop high-speed rail line across Missouri: a three-quarter-scale mock-up of the system’s envisioned 700 mph transit pod.

A feasibility study by the Missouri Hyperloop Coalition, formed between Virgin Hyperloop One, the University of Missouri, and engineering firm Black & Veatch, is expected this fall.

However, critics continue to contend the technology is unproven and changes is federal funding for such expensive projects is likely to fall more on state and local government.

The Missouri Hyperloop Coalition is led by Travis H. Brown, who was also in charge of the failed “Better Together” St. Louis city-county merger effort.

The official text of the meeting’s keynote address by U.S. Secretary of Transportation Elaine Chow was not publicly available as the Chronicle went to press.

International investment opportunities in Metro East were discussed with a delegation of Japanese industrialists during the Oct. 4 meeting of the Leadership Council Southwestern Illinois.

Representatives of Keidanren, the Japan Business Federation, and the Japan External Trade Organization (JETRO) outlined the requirements of Japanese corporations considering new facilities in the U.S. 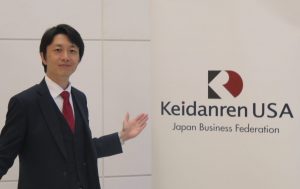 The presentation followed a tour of Edwardsville and a reception in O’Fallon, the previous day.

Japanese businesses are already opening production facilities in the American Midwest; however, this month’s trade excursion represents the first visit by representatives of the two key Japanese trade organizations to Southwest Illinois, according to JETRO Chief Executive Officer Ralph Inforzato.

JETRO is a non-profit organization that provides business support services to companies expanding to Japan.

During a stop at the Madison County Courthouse, County Board Chairman Kurt Prenzler presented the Japanese delegation with a copy of the county’s Rivers and Routes pamphlet, printed in Japanese.

This month’s Japanese trade mission to Metro East was organized by the Leadership Council in cooperation with AllianceSTL, a regional St. Louis-area business development group.

It follows an initial meeting with the Japan business organizations at a conference in Chicago earlier this year.

The unemployment rate for the Illinois section of the St. Louis Metropolitan Statistical Area was 3.8 percent in August 2019, according to data released Oct. 9 by the U.S. Bureau of Labor Statistics. That represented a decrease of 1 percent from the August 2018 rate of 4.8 percent.

In Madison County, the unemployment rate stood at 3.7 percent in August — down one percentage point from 4.7 percent a year earlier.

In Monroe County, the unemployment rate dropped to 2.9 percent;  down 0.7 percentage points from the 3.6 percent recorded a year earlier.

St. Clair County saw its unemployment rate fall to 4.3 percent in August – down a full percentage point from 5.3 percent during the same month of last year.

Unemployment rates for Metro East’s largest cities during August were as follows:

The unemployment rate for the Greater St. Louis area overall stood at 3.3 percent in August — down from 3.6 percent a year prior.

Statewide, Illinois reported a jobless rate of 4.0 percent in August, down from percent during the same month last year.

The U.S. unemployment rate in August was 3.7 percent.