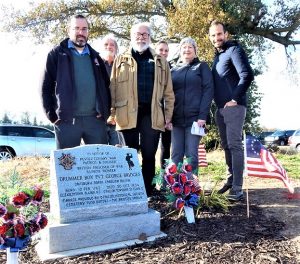 The annual Native American Holiday Market to be held at Nov. 29 through Dec. 1 at Cahokia Mounds State Historic Site will feature 35 artists, craftspersons and vendors.

Their work includes paintings, drawings, baskets, beadwork, pottery, sculpture, metal work, wood carvings, feather work, flutes, decorated gourds and jewelry of all types. All items are made by Native Americans and most reflect some aspect of native culture.

On Veterans Day, 185 years after his death in 1834, George Benjamin Bridges, Revolutionary War soldier, prisoner of war and Illinois pioneer, had visitors.

Those gathered in the Bridges family cemetery in St. Clair County to dedicate a new memorial cenotaph included six of George Bridges’ descendants, members of the Lewis & Clark Chapter of the Illinois Society of Sons of the American Revolution and the O’Fallon Historical Society and Boy Scouts from Troop 46.

Thomas Schwarztrauber, president of the historical society’s Cemetery Detectives, said Bridges was born Feb. 12, 1762 near Elizabethtown, North Carolina. He enlisted in the Salisbury militia March 10, 1777, and served 19 months. In 1780 and 1781, he served four three-month terms.

The Rev. James Bridges, George’s fourth great-grandson, said his ancestor trained as a blacksmith as a young man in North Carolina. After the war, he married Margaret Ann “Nancy” Edwards in Newberry County, South Carolina.

The couple had their first child, William, in 1789.

The family later moved to Kentucky, where William married Margaret “Peggy” Armstrong, Rev. Bridges continued. From there, the family moved to Madison County, Illinois about 1811. It was previously believed that George died there, and his name is on a Daughters of the American Revolution memorial plaque of Revolutionary War soldiers buried in that county.

However, the Cemetery Detectives visited the family cemetery in 2015 and began to clear it of weeds and move headstones back from a field.

In 2018, the group learned that a land transfer record documented that George Bridges died in O’Fallon.

The Cemetery Detectives obtained permission from Rev. Bridges to repair and reset stones in the cemetery. Besides George, they believe Nancy, William and Peggy Bridges are buried in the family cemetery along Hagemann Road in O’Fallon Township.

The Lewis & Clark SAR chapter presented a community service award to Schwarztrauber and the Cemetery Detectives earlier this year.

The Waterloo FFA garnered one of five major awards presented during the 92nd National FFA Convention & Expo in Indianapolis, Oct. 31.

Named the top FFA chapter in Illinois multiple times in the past, the Waterloo agriculture students this year took home the National FFA Organization’s Premier Chapter award, in the category of “Growing Leaders,” for their “Fun Fitness in Ag” exercise video.

“Waterloo FFA members created a workout video that promoted the mental and physical well-being of students in kindergarten through third grade. Members chose the age-appropriate exercises and activities and filmed and edited the video. By creating ‘Fun Fitness in Ag,’ members worked together to create a fun activity that influenced those involved,” according an announcement from the national organizations.

The Waterloo FFA was named top FFA chapter in Illinois in both 2016 and 2017.

The National FFA Organization — formerly known as the “Future Farmer of America” has some 8,600 chapters nationwide.

The Waterloo chapter was among 45 considered for major awards during last month’s national convention.

The central business district will have three sub-districts (Zones B-1A, B-1B and B-1C).

Aldermen approve the revised zoning ordinance on a 5-1 vote.

Changes approved this month represent the first part of a three-phase update of the Edwardsville zoning ordinance.

Phase two will establish design guidelines for commercial buildings and a developmental review process, according to city officials.

The third phase will new a new Interstate 55 Zoning District, for the town’s growing warehousing and distribution complex, and a R-3 zoning district for multi-family structures.

Development of the second phase began is underway with work on the third expected to begin late this year or early next.

Meanwhile, in Alton, plans for conversion of the Jacoby Arts Center and Lucianna’s Pastries building, into apartments and artist works spaces, were outlined during Alton Main Street’s Nov. 5 “What’s Up Downtown” meeting. The buildings are the first to be renovated under a $75 million downtown revitalization project, funded by attorney John Simmons and wife Jayne. 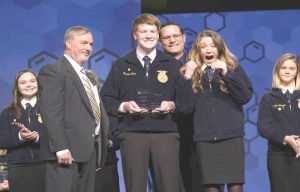 “Rather than viewing a roadway project as solely a way to move more cars and trucks faster, the goal of the St. Louis Great Streets Initiative is to trigger economic and social benefits by centering communities around interesting, lively and attractive streets that serve all modes of transportation,” program literature explains.

Since 2006, the St. Louis Great Streets program has facilitated redevelopment in 14 locations including the North Grand Avenue entertainment district near the Fox Theatre, a section of Martin Luther King Drive in North St. Louis, the rural tourist mecca of Kimmswick, Missori., and a section of Forest Park.

In Alton, goals include:

EWG issued Alton a nearly $500,000 planning grant for the program in February.

Alton Main Street, the merchants’ association for the city’s downtown area, is also helping to organize the effort.

The first in a series of community planning workshops is set for Wednesday, Nov. 20  from 6:30 to 8 p.m., at a location to be announced.

“Claimed,” an independently produced horror film, shot in Hartford and inspired by the Metro East’s ongoing heroin epidemic, is set for premier, Dec. 4 from 4 to 6 p.m. at the St. Louis County Library Prairie Commons Branch at 915 Utz Lane in Hazelwood, Missouri.

A roster of experienced independent film actors — including Stephen Potter of Alton — in lead roles is supported by more than 130 mostly volunteer cast and crew, from around the nation; as well as from Alton, Wood River, and Godfrey.

Additional showings are set for the Lewis and Clark Historic State Park in Hartford, the Post Commons in Alton and locations in Mount Vernon, Chicago and Carlyle. Dates are to be announced.