I-255 reconstruction begins this weekend

Reconstruction of a seven-mile stretch of Interstate 255 in Metro East begins Feb. 1 with the full closing of both the north- and southbound lanes of the highway, between I-55/70 and I-64, for approximately five months, according to the Illinois Department of Transportation (IDOT)

Sections of I-55/70 and I-64 will be marked as officially designated detours, according to IDOT.

The I-255 reconstruction project involves rehabilitation and resurfacing from Collinsville Road to Illinois 15; with significant bridge repairs, safety improvements and drainage upgrades.

The work will be undertaken in phases; involving two sections of highway separated by I-64.

Once the section north of I-64 is finished this summer, construction will shift to the section between I-64 and Illinois 15, again requiring a full closure of the work zone in both directions for approximately five months, according to the department.

The entire project is to wrap up no later than Nov. 25.

Motorists should allocate extra time in their schedules if they are planning to travel through the area, IDOT advises.

The department recommends public transportation and traveling during off-peak hours, if possible.

To inform the public about the project, detours and other potential alternative routes, IDOT has launched a project webpage that can be viewed by visiting www.idot.illinois.gov or https://tinyurl.com/I255rebuild.

The page features project details as well as maps and fact sheets.

The wall – known for providing those atop a panoramic view of the Mississippi River – reportedly became unstable late Jan. 19 and gave way to following morning.

A residential neighborhood on the ridge, normally held in place by the roughly four-story wall, is not presently at risk, city officials believe. A temporary berm has been constructed at the bottom to protect a working machine shop, nearby, from falling debris.

For more than a year, city officials have been concerned by cracks in the wall; brought on, they believe by, flooding and consistently above-average rain.

Plans to stabilize the wall have already been developed by the Alton civil engineering firm of Sheppard, Morgan, and Schwaab.

Negotiations have been underway with the Federal Emergency Management Agency (FEMA) regarding cost sharing.

The resolution also authorizes city crews to continue emergency work at the site.

To expedite repairs, preapproval for the work will not be sought from FEMA, city officials say. 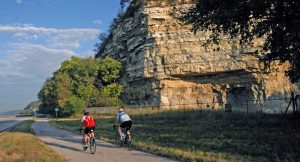 Riverview Drive bluff in Alton along the Mississippi River. (Photo courtesy of visitusa.org)

The Madison County Health Department (MCHD) is again offering $10 test kits to allow residents to check the radon levels in their homes.

A colorless, odorless, tasteless, and invisible gas that occurs naturally in the soil, radon typically enters a home through cracks and holes in the foundation.

In some cases, it can also enter a home through water that is obtained from the ground, such as from water wells.

According to the Environmental Protection Agency (EPA), the average indoor radon level in the U.S. is about 1.3 pCi/L.

The Illinois Emergency Management Agency (IEMA) reports that the average indoor radon level in Illinois is about 4.9 pCi/L.

The U.S. Surgeon General and EPA recommend fixing homes with radon levels at or above 4pCi/L.

Test kits are available while supplies last. The $10 cost includes all testing fees and pre-paid postage to mail the kit for analysis.

For more information, call MCHD at 618-296-6079 or visit www.co.madison.il.us/departments/health/radon.php.

St. Louis Regional Airport Board meeting schedules, agendas, and minutes are now available on the airport’s web site. The notices, required under Illinois law, had never been posted online by the board before December.

The posts reportedly come after months of prodding by Republican Madison County Board Chairman Kurt Prenzler.

For several years, Prenzler has been pushing all 70 of the county’s special boards and commissions to establish websites and post online public information, as defined under state law.

Should a board and commission not have a website, Madison County will post the entity’s meeting notices and related public information on its site, Prenzler said.

The Bethalto airport is presently pursuing an aggressive expansion program.

The dairy trade publication nominated 31 new food and beverage products, from among hundreds reviewed in its print and online editions last year; then asked its website visitors to vote for the Best New Dairy Product of 2019.

Introduced last fall, the cottage cheese cups are available through retailers and food service companies throughout the Midwest.