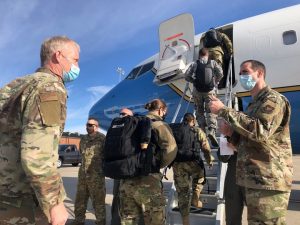 Most were transported aboard a 932nd Airlift Wing C-40C to assist medical staff in the New York region.

The City of New York is considered the site of the largest outbreak of the coronavirus in the U.S.

All the reservists were medically screened, prior to deployment, according to the Department of Defense and the Centers for Disease Control guidance, according to a Scott AFB Public Affairs statement. Temperatures of each reservist were taken to ensure health before leaving. Health records were reviewed and updated.

The mobilizations, here last month, were part of the larger deployment of more than 150 Air Force reservists across the nation to support the COVID-19 response.

That latest deployment brings the total of Air Force reservists mobilized for COVID-19 relief efforts to more than 770 nationwide.

After taking off from Scott Air Force Base, the C-40C plane flew to Barksdale Air Force Base in Louisiana to pick up eight more reserve medical airmen from the 307th Bomb Wing.

In all, there are currently more than 54,300 U.S. Department of Defense personnel supporting COVID relief efforts with almost 15,000 deployed in support of response operations.

Nearly 5,000 Navy, Air Force, and Army reservists and 35,750 National Guard professionals are now supporting the COVID-19 response around the nation.

As COVID-19 response requirements for medical personnel, aeromedical evacuation capabilities, logistics experts and other specialties grew, the Air Force Reserve was granted the authority to activate reservists, as needed, under an executive order signed March 27 by President Donald Trump.

In the body of the e-mail, reservists should provide name, rank, AFSC, assigned/attached unit, civilian email, address, phone number and indicate if they are currently involved in COVID-19 response in their civilian jobs.

As the unified transportation service for all branches of the American military, the United States Transportation Command (UTRANSCOM) may be called on to convey military personnel with COVID-19, personnel responding to coronavirus relief efforts (see above), or supplies used in COVID-19 prevention or treatment.

Potentially infected personnel are directed to testing or isolation by a new Trace team, which then cordons off potentially contaminated work environments for cleaning by either an internal on-call unit or the base’s decontamination team.

“… when informed of the rare COVID-19 positive within the USTRANSCOM campus … hazmat-suited group employed foggers and misters to disinfect the infected individual’s workstation,” the USTRANSCOM statement explains.

Since mid-March, the UTRANSCOM custodial staff has been increased from four six; allowing additional, intensified cleaning of lavatories and office areas, as well as continuous specialized sanitizing of frequently touched items such as door handles and stairwell railings.

“By all accounts, not one of the cases within USTRANSCOM facilities have led to another infection,” U.S. Army Col. John Gamby, TRANSCOM/SDDC HQ Response Cell lead, said.

The USTANSCOM statement does not provide specific data on COVID-19 cases in the military, transporting of COVID-19 patients, or the specific number of suspected or confirmed coronavirus patients at Scott AFB. 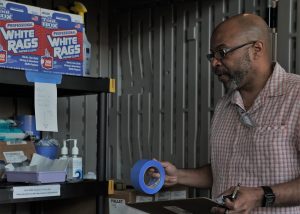 Exact start dates were not included in materials prepared for the EWG board meeting.

The EWG is the federally recognized regional planning entity for the St. Louis area, charged with – among other responsibilities – recommended public works projects for federal funding.

EWG board-approval was required for changes in the schedules for the four highway projects because all four are funded primarily with federal dollars.

In addition to monthly meetings of the full Madison County Board, meetings of the county’s various board committees are now available live online at: https://m.twitch.tv/madisoncountyiL.

To hear audio of the meeting, tap “UNMUTE” on the live stream screen, county officials advise.

They also advise the interested public to join the live stream five minutes prior to the start of the meeting.

Comments and questions are accepted at teleconferenced county committee meetings.  However, they must be submitted 24 hours prior to the meeting to be part of the official record.

Comments or questions can be submitted online — with commenter’s first and last name, email, and county committee name required — at www.co.madison.il.us/public

The Monroe County Courthouse, on April 27, became the first county or local government facility in Metro East, and likely in the St. Louis area, to reopen to the public, following the onset of the COVID-19   will be able to do so beginning April 27.

At least “partially,” according to County Clerk Jonathan McLean (R).

Citizens are still being asked to conduct business with the county by phone whenever possible.

New guidelines are in effect for the conducting of business with the county clerk’s office at the downtown Waterloo courthouse.

Scheduled appointments are encouraged, or in some cases, necessary, according to McLean

McLean asks those, needing to conduct business with his office’s services, to call 939-8681, ext. 302, to determine the best way to complete the work.