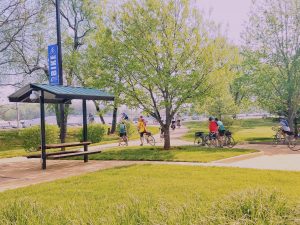 The Metro East Park and Recreation District recently awarded $2 million in grants to local parks and trails throughout the region. (Photo courtesy of MEPRD)

According to Jen Cochran, MEPRD Grant Coordinator, applications for the next grant cycle should be made available in July 2019.

These grants cover a portion of park and trail project costs, requiring applicants to provide a

“We are all fortunate that local residents and leaders understand and appreciate the value of quality parks and trails throughout the Metro-East. Recreational facilities and opportunities are second to none throughout Madison and St. Clair Counties, and they only continue to get better thanks to the numerous public agencies that MEPRD calls partners,” Cochran said,

“We wouldn’t have the system we do if it weren’t for the hard work, upkeep, and foresight provided by our partners,” Werner said.

This year’s grant awards were made to 19 separate project sponsors, consisting of 16 park projects and three trail projects.

one county, and one non-profit. Below is a listing of grant recipients and their corresponding projects; visit www.meprd.org/projects to see further detail such as project scopes and estimated completion dates.