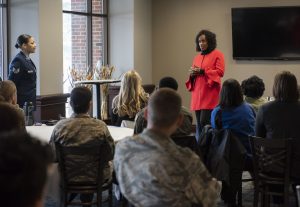 Olympian and activist Jackie Joyner-Kersee holds a question and answer session with Airmen before speaking at the 2019 Annual Martin Luther King Jr. Luncheon, Jan. 17, 2019, at Scott Air Force Base. She talked about her relationship with her mentor, four-time Olympic medal winner Wilma Rudolph, and she offered advice about staying humble and dedicated to community service. (U.S. Air Force photo by Senior Airman Tara Stetler)

The East St. Louis native and six-time Olympic medal winner spoke about how she was inspired to positively impact her own community by creating the Jackie Joyner-Kersee Foundation, which supports young people through education, athletic, and character-building programs.

“Dr. Martin Luther King had a dream for all of us that one day we would rise above and work together, disagree but agree to make a difference in the lives of the people we’re trying to impact,” she said to a packed crowd. “I continued on my journey in trying to be the best in hopes of connecting the people I came across to invest in a community like East St. Louis.”

“Not only is she a native from East St. Louis,” said Mercado, “but she continues to advocate for some of the same principles as Dr. King, like racial equality and social reform.”

Joyner-Kersee also stressed the importance of understanding why it was important to achieve her goals. For her, it was about changing mindsets and empowering generations of athletes to come.

Mercado said her biggest hope for the event is that people walked away remembering “the importance of treating others with humanity and empathy [because] these ideals, among many others, provided the foundation Dr. King promoted.”