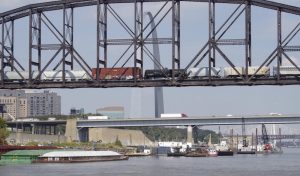 Further widen and renovations along I-270 in Madison County, the long-planned relocation of Illinois Route 3 in St. Clair County, and, eventually, replacement of one of the oldest bridges spanning the Mississippi River are among $1.6 billion in transportation infrastructure projects officially proposed April 27 by the new St. Louis Regional Freightway district.

Many,  including all four of the district’s “high priority” projects in Metro-East.

A subsidiary of the Bi-State Development Agency, the St. Louis Regional Freightway is charged with establishing the Greater St. Louis area as a nation multimodal freight hub and distribution center.

Its work will initially be centered largely around transportation infrastructure projects designed to facilitate further growth along the I-55 Gateway Development Corridor in Edwardsville and the America’s Central Port complex at Granite City. 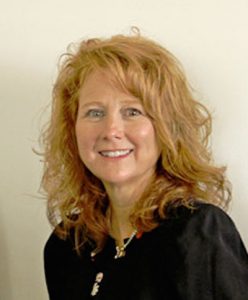 “What you’re doing here, with your regional freight district, is critically important and really smart,” Gregory G. Nadeau Nadeau said. “Trade, transportation and opportunity have always been linked together.”

Designated ed as the district’s four top priorities are:

▪  Replacing the I-270 bridge across the Mississippi River between Madison and St. Louis County, at an estimated cost of $160 million to $175 million. The new bridge would expand the highway to six lanes, from the present four, across the river.

▪  Relocating a 1.1-mile stretch of Illinois Route 3 in St. Clair County, from River Park Drive in East St. Louis south to Monsanto Avenue in Sauget, at an estimated cost between $125 million to $170 million depending on how many lanes are built.

▪ Constructing a railroad bypass on Illinois 3 in Sauget, at an estimated cost of $20 million to $25 million, to prevent traffic backups when slowing-moving trains cross the roadway.

The project priority list was developed largely on the basis of the Southwestern Illinois Freight Transportation Study, a 2013 report commissioned by Leadership Council Southwestern Illinois to get a better understanding of the region’s position in the freight market and to evaluate where to prioritize investment.

In all, the district hopes to undertake a total of 18 transportation infrastructure projects at a total cost of $1.5 to $1.6 billion.

The high priority were selected based on economic impact, importance to multimodal freight traffic, and potential to improve transportation efficiency on the region, according to Terminal Railroad Association of St. Louis President Mike McCarthy, who served on the district’s needs analysis committee.

The district’s long list of infrastructure projects also includes replacement of the Merchants Bridge across the Mississippi River, which is 126 years old but still the primary river crossing point for freight trains in the region.  Replacing the bridge would cost an estimated $222 million.

Major road and bridge projects are generally funded with a mix of federal, state and local government dollars.

However, because of such sizeable costs involved in the freight district’s proposed projects, district officials are hoping public private partnerships can be developed to provide some funding.

In the case of the Merchants Bridge, the freightway is proposing the Terminal Railroad Association, which own the bridge, contribute $46 million and finance an additional $101 million. The freightway also plans to then asking for a federal grant to cover the other $75 million.

Requests are already in the works for federal grant money to help pay for a freight network analysis in the region, and a federal Transportation Investment Generating Economic Recovery grant for I-270 improvements IDOT has already set aside $9 million for preliminary engineering work on the I-270 bridge replacement.

“The key to that is we also need to consider public-private partnerships,” McCarthy said.

In a related development, on the same day as the freight summit, Rep. Rodney Davis and Rep. Mike Bost toured the Melvin Price Locks and Dam 26 at Alton, to discuss ways to ensure ongoing federal funding for maintenance and improvements.

They hope to include an ongoing program of improvements in a pending reauthorization of the federal Water Resources Development Act.