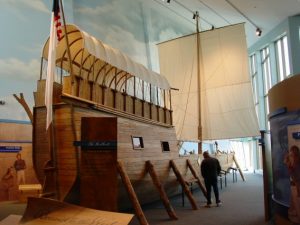 A 55-foot full-scale replica of the expedition’s keelboat at the Lewis & Clark Interpretive Center near Hartford, Illinois.  The museum has received Rebuild Illinois money. (Photo courtesy of Lewis and Clark Museum)

Gov. J.B. Pritzker’s $41.5 billion ‘Rebuild Illinois’ capital improvements program allocates a total of some $254,469,000 for projects in Madison, Monroe, and St. Clair county communities, according to a detailed version of the plan released earlier this month.

In addition to a total $248,989,000 for 39 earmarked projects, the program authorizes up to a total of $5.48 million in grants for derelict building demolition or infrastructure projects to be designated over the next six years in 29 communities.

Communities for which earmarked projects have been approved are as follows:

Grant funding, up to specified maximums, will be made available through the Department of Commerce and Economic Opportunity  for infrastructure improvements or abandoned building demolition as follows:

Earmarked grant funds of up to $250,00 are set aside for the Pop Myles facility in East St. Louis. At least some projects are expected to begin over the next twelve months.