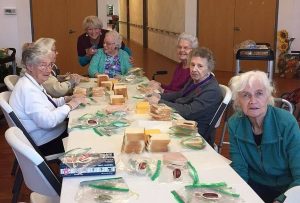 However, the East St., Louis Join Hands and Waterloo HNS programs — along with a fourth finalist, Kewanee’s Step Ladder Tutoring Program — received praise and plaque for their offices, during the reception. Road signs honoring their achievements will be placed in their communities, according to the commission.

Two other Metro East entities — Collinsville’s Hometown Heroes program and Godfrey’s Beverly Farm Foundation — were among 10 from around the state honored by the commission for specific volunteer community services projects.

The Governor’s Hometown Awards program is designed to give formal recognition to local groups that contribute to their community’s quality of life.  To qualify, programs must meet a demonstrable need, enjoy strong volunteer support, and make a documentable impact.

Metro East has claimed a fair share of the awards over recent years.

The Join Hands Project is comprised of more than 100 volunteers who hope to break the cycle of generational poverty and empower East Saint Louis citizens, according to program literature. Volunteers are assigned to teachers in East St. Louis schools, to help identify students who may be struggling academically or suffering from social or emotional issues. 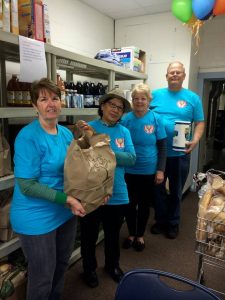 “Whenever an issue arises they work alongside the parent and teacher to fulfill that child’s need,” the project’s nomination form explains. “Whether it be helping a parent get their child extra services, or just building a healthy relationship with that family, whatever it takes to make sure that the student performs to the best of their ability academically, as well as socially.”

“East Saint Louis faces many challenges from crime to unemployment, the advocate’s role is sometimes vital to a families’ knowledge base, the nomination continues.

Because “new issues arise every day,” counseling is provided on a continual basis.

Waterloo’s House of Neighborly Service (HNS) was established in 2015, to coordinate the efforts of various community organizations and church groups to more efficiently and effectively assist community members in need.

Initial efforts centered largely around staffing the City of Waterloo telephone helpline, which offers referrals for assistance with virtually any type of problem from paying rent, finding a job, or needing food, to car repairs, or domestic abuse.

“The help line turned into a huge asset” for the Waterloo area, the program’s nominating form notes.

To assist community members more directly, the helpline volunteers then group began to work with the Waterloo Food Pantry; eventually transforming a city-owned garage into an emergency food source to supplement the pantry’s existing efforts.

Collinsville residents Pat and Leonard Reitz developed their Hometown Heroes project in 2015 to increase awareness of area military veterans. In just the first year of the annual program, some 139 banners —each with the photograph and name of a local military service person —are were displayed on light standards in Collinsville’s Uptown shopping and recreation district during summer months. 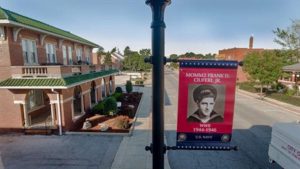 The Hometown Heroes project began in 2015 in Collinsville by Pat and Leonard Reitz to increase awareness of area military veterans. Nearly 140 banners have been on display over the past two years. (Photo courtesy of Collinsville

Banners are available for veterans who served at any time from World War I to the present, Reitz said. Banner are prepared based on nominations made by the family of service personnel. The family must provide a photo of the veteran, along with name and other pertinent information. A donation is requested to help cover costs. Banner are mounted by the City of Collinsville Public Works Department.

“We had many more applications for banners to be displayed the following year, and the program will continue as long as residents support the project and submit requests for banners” Reitz adds.

The program was recently expanded to O’Fallon.

Godfrey’s Beverly Farm is a planned community providing housing and employment for more than 400 adults with intellectual or developmental disabilities. The facility is designed to provide residents “quality of life with opportunities and challenges within each individual’s functional capabilities,” Beverly Farm literature explains. It is operated by not-for-profit Beverly Farms Foundation.

Revenues from those businesses are supplemented by proceeds from three major annual fund raisers.

While Beverly Farm has paid staff, operation of facility would be virtually impossible without the more than 130 volunteers from around the region who help to provide services.

“Beverly Farm Foundation is blessed with wonderful neighbors, friends and churches (who) volunteer to complete tasks with and for the residents,” the facility’s nominating form notes.