HSHS St. Elizabeth’s Hospital in O’Fallon and HSHS St. Joseph’s Hospital in Breese were both awarded grades of A from the nationally recognized healthcare improvement organization.

Anderson Hospital in Maryville and OSF Saint Anthony’s Health Center in Alton were both assigned grades of B for patient safety.

Established in 2000. the Leapfrog Group is a nonprofit watchdog organization founded to serve as a voice for health care purchasers, using their collective influence to foster positive change in U.S. health care. It has become the nation’s leading advocate of hospital transparency; collecting, analyzing and disseminating hospital data for consumers and insurers.

Its Safety Grade assigns ‘A’, ‘B’, ‘C’, ‘D’ or ‘F’ grades to hospitals across the country based on their performance in preventing medical errors, injuries, accidents, infections and other harms to patients in their care.

Preventable medical errors are now the third leading cause of death in America, the organization notes, citing data from the U.S. Department of Health and Human Services.

The 20 hospitals on the Missouri side of the Greater St. Louis area, likewise all drew safety ratings in the A-through-C range, with the exception of Christian Hospital Northeast in North St. Louis County, which drew the region’s lone D.

Barnes-Jewish Hospital in the city of St. Louis — flagship of the BJC Healthcare system that dominates much of St. Louis area healthcare — received a patient safety rating of C.

Illinois ranks 14th among states in hospital safety; with 38.18 percent of its hospitals earning A grades for safety. 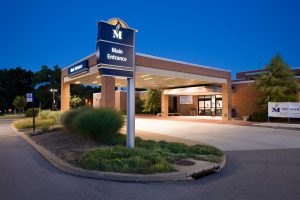 “HSHS St. Elizabeth’s Hospital continues our commitment to providing quality patient care. We are always proactively working on numerous initiatives to continue to elevate our quality and patient safety processes,” said St. Elizabeth’s Hospital President and CEO Patti Fischer of her institution’s A rating. “It is evident, since receiving this top ‘A’ rating from The Leapfrog Group, that the efforts of all our colleagues, physicians and health care partners are making a positive impact in the safety of our patients.”

Fischer also noted, “Safety is a hospital-wide collaboration and every single colleague has an impact on the safety of our patients and the experience they receive at the hospital. I am extremely proud of our team’s efforts and service.”

“To be recognized nationally as an ‘A’ hospital is an accomplishment the whole community should take pride in,” said Leah Binder, president and CEO of The Leapfrog Group. “Hospitals that earn an ‘A’ grade are making it a priority to protect patients from preventable medical harm and error. We congratulate hospital leaders, board members, staff, volunteers and clinicians who work so hard to earn this A.

HSHS St. Joseph’s Hospital has consistently earned A ratings for patient safety over the past three years (2016-2018).

Anderson Hospital earned its second consecutive B, after a history of C grades back through 2016.

Alton Memorial has seen safety ratings steadily fall. Its C rating this spring was the second in row; following B grades in the two previous rating periods and As in the three prior to that.

Memorial Belleville has earned B ratings for safety during every previous rating period over the past three years.

Memorial East, which opened in mid-2018, drew a C for patient safety during its first rating period last year.

Developed under the guidance of a panel of nationally recognized experts, the Leapfrog Hospital Safety Grade uses 28 measures of publicly available hospital safety data to assign grades to more than 2,600 U.S. acute-care hospitals twice per year. The Hospital Safety Grade’s methodology is peer-reviewed and fully transparent to the public, according to the organization.