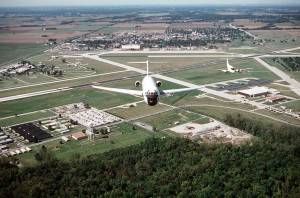 A newly planned Scott Air Force Base (AFB) Community Partnership is being organized by leaders from the base and six nearby communities to develop innovative alliances that will benefit both the military and civilian sectors. Photo by Scott Ken Hackman

A newly planned Scott Air Force Base (AFB) Community Partnership is being organized by leaders from the base and six nearby communities to develop innovative alliances that will benefit both the military and civilian sectors. In the process, they hope to help secure the base’s future as Congress eyes plans for a new Defense Base Closure and Realignment Commission (BRAC) to close or downsize U.S. military installations.

The proposed new partnership is one of 50 established or under development around the nation, under terms of the Air Force’s Public-Public, Public-Private (P4s) Program, begun in 2012.

Organizers hope to formally announce the new partnership as early as this week. Talks regarding the formation of the partnership have been underway for almost two years.

“The partnership provides an ongoing framework to identify requirements and needs among the partnership (partners) and to develop collaboration opportunities to increase the Scott AFB’s ability to contribute the Department of Defense’s future mission capabilities,” according to a memorandum of understanding for the partnership, now being circulated among base commanders and officials in nearby communities. “These partnerships offer a means to leverage the capabilities and resources of military installations, local governments, or commercial entities to enhance mission effectiveness or create efficiencies or economies of scale, including by reducing costs while enhancing the quality of life of our respective communities.”

P-4 partnership projects typically center around cooperative purchase, shared services, facilities and programming, and achieving economies of scale, through resource exchanges. Projects generally fall into either the category of public-public partnerships – between military installation and nearby local government entities, and public-private partnerships between military bases and local businesses/.

The Chronicle was unable to obtain comment from organizers regarding the first project that might be undertaken under the partnership.

Organizers similarly would not comment on whether the partnership could be helpful in attracting the National Geospatial-Intelligence Agency (NGA) to Metro-East. Officials last year announced plans to more the agency from its current location in South St. Louis. A site north of Scott AFB is among four locations under consideration.

Military-public-private partnerships so far around the nation have ranged from opening access base or local recreation facilities and mutual utilization of health care facilities, to job training and placement programs and contracting opportunities for local businesses.

In Texas, where Laughlin Air Force Base is developing a partnership with the nearby City of Del Rio and Val Verde County, a recent agreement allows service members to use the county sheriff’s firing range and an aircraft maintenance certification program, designed to help fill a critical labor shortage, has been established at Southwest Texas Junior College.

At Wright-Patterson AFB in Ohio, partnership projects began last year with opening the base swimming pool to the nearby civilian community. Short-term projects include the launch of a regional workforce website to connect local talent with available jobs. Education is central to a number of projects. Wright-Patterson is working with nearby Sinclair Community College to provide firefighting and leadership training. The college and base also plan to place base personnel, who are planning to leave the service, in internship positions with local government contractors. It could potentially be an important program as the military looks to outsource jobs, organizers say. Most recently, base healthcare facilities has begun accepting patients from the Veterans Administration Medical Center in Dayton and other regional VA sites. A formal agreement that would pave the way for more is expected soon.

Wright-Paterson plans to begin relying on partnership projects to achieve substantial cost savings through more ambitious, larger scale projects in 2015, according a message from base commander.