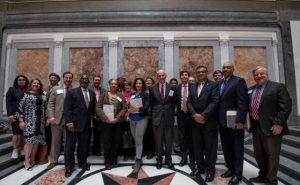 The Export-Import Bank of the United States (EXIM), Scott Air Force Base, H-1 B visas, and a Hyperloop are among the top legislative priorities for St. Louis-area business this year, according to the St. Louis Regional Chamber’s (SLRC) 2020 “State of St. Louis” report.

Developed annually by the Chamber of Commerce for the 15-county Greater St. Louis area, the State of St. Louis is designed to “set the business agenda for the coming year,” according to the St. Louis Business Journal; sponsor of a Jan. 10 roll-out event for the 2020 edition.

“The Regional Chamber is not changing its priorities dramatically in 2020. We aim to build on the successes of last year in the same three categories: economic development, workforce development, and transportation and infrastructure.”

In fact, four of the SLRC’s 2020 State of St. Louis legislative objectives, held over from 2019 list, were actually achieved late last year as the new list was being prepared.

Despite its name — and unlike the “Where We Stand” report periodically compiled by the East West Gateway Council of Governments — the State of St. Louis offers little objective data on the state of affairs in the Gateway region; instead providing lists of federal, Illinois and Missouri legislative or policy priorities for the business community.

Outlined below are the SLRC’s top federal and Missouri state-level legislative priorities. A detailed look at the organization’s priorities in Illinois will follow in future issues of the Chronicle. 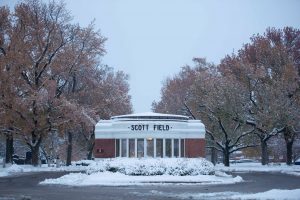 Scott Air Force Base, which marked its centennial in 2018, is now designated by the U.S. Department of Defense as a cyber security center of excellence. With that designation, the The St. Louis Regional Chamber sees new opportunities to attract additional squadrons and missions. (Photo courtesy of Scott AFB)

Economic and workforce development: “The Chamber advocates for governmental policies that support high employment, low costs, and sustainable growth. These efforts include monetary and fiscal policies, regulation of financial institutions, trade, and tax policies. In addition, ensuring our region has a diverse, educated, and skilled workforce able to accommodate employers’ needs while embracing continuous growth and development is critical to our success as a region,” the State of St. Louis document states; although it sites no specific federal action or legislation supported by the group.

Transportation and infrastructure: “Continued investment in our roads, highways, bridges, airports, railways, waterways, and intermodal links is integral to our region’s prosperity. Furthermore, improvements to our water supply, sewers, electrical grids, and quality broadband internet will improve the lives of our citizens,” the documents states.

Many roads and bridges in Illinois and Missouri have been graded “C” or “D” by the American Society of Civic Engineers, the Chamber document notes. Again, the documents list no specific federal-level action or legislation advocated by the SLRC; although several specific measures are outlined under the organization’s state-level priorities.

H-1 B visas: The H-1 B visa allows U.S. employers to temporarily hire foreign workers in specialty occupations. It is commonly used for information technology workers. The center of numerous controversies, the program has been the target of several rounds of reforms under several presidential administrations.

The SLRC document expresses support for the H-1 B program but endorses no specific positions or legislation on the program.

Key military Installations: With Scott AFB now designated by the U.S. Department of Defense as a cyber security center of excellence, the St. Louis Chamber sees new opportunities to attract additional squadrons and missions to the base. However, the SLRC document again mentions no specific federal legislation or policy affecting the base. 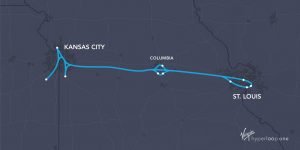 The proposed ultra, high-speed rail called the Missouri Hyperloop aims to relieve traffic congestion along the I-70 corridor between St. Louis and Kansas City and to bring travel time between Kansas City and St. Louis to less than hour. (Image courtesy of hyperloop-one.com)

Economic/Workforce Development: The Chamber supports modification of the Missouri Works program, allowing businesses to save on state withholding tax for new jobs and/or receive state tax credits, based on a percentage of payroll of the new jobs.

Transportation & Infrastructure: The SLRC supports use of non-traditional (beyond motor fuel tax) funding mechanisms — such as toll roads, increased vehicles registration fees, and other types of taxes — to build and maintain transportation infrastructure.

The Chamber specifically supports dedicating a portion of Missouri sales and use tax revenue to state road fund.

Innovation Funding: The St. Louis Chamber lists “capital, infrastructure, and networking relationships … to create and scale new enterprises” as a priority; but offers no specific examples of programs or legislation.  “… relationships with the entrepreneur and business communities must be nurtured to realize the region’s full potential.”

However, critics note hyperloop technology has never been scientifically demonstrated to work. A state task force on the project last year took the unusual step of including in its report a lengthy list of concerns, including warnings that the U.S. Department of Transportation might rule hyperloop unsafe and non-licensable for human or even freight transportation.

The complete SLRC State of St. Louis document can be accessed at https://bit.ly/38el6lW