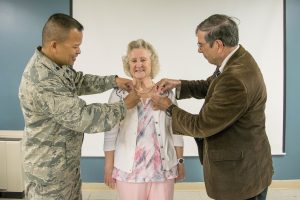 Not only does 2017 mark 70 years for the Air Force and the Centennial birthday of Scott Air Force Base, but it also represents 50 years of dedicated service by Scott’s Karen Bunch.

Bunch was recently honored for her many years with the Air Force during a Cyberspace Support Squadron Wingman Day luncheon.

Bunch, CYSS mission readiness training manager, began her career in 1967 as a clerk stenographer for the Air Force Communications Service and, in 1970, transferred with the organization to Richards-Gebaur AFB, Mo., where she worked for the AFCS as a secretary.

“My first job out of high school was in services for crippled children in Belleville, and I thought that working for the government in the Air Force I would make a lot more money,” said Bunch. “Starting out as a clerk typist in those days we still had manual typewriters.”

In 1972, Bunch moved back to Illinois and worked for Headquarters Mobility Air Command once again as a clerk stenographer for the Maintenance Directorate. By 1983 Bunch was back with the AFCS and until 2012, worked for the various organizations that evolved from it as well as the Air Force Network Integration Center. During this time, she served in a variety of positions including personnel management specialist, programmer analyst, and computer specialist.

“I like the work,” said Bunch. “I met my future husband whose boss told him we need a secretary and he had to ‘woo’ me and make sure I moved to Kansas City, Mo., with the organization and he did a good job.

Bunch said the work was always a challenge but she was able to meet nice people. She said the only negative was the people she really cared about kept moving. 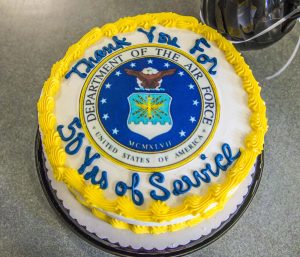 The CYSS was stood up in 2012 and Bunch assumed her current duties.

“Right now, with my job we help Air Education Training Center determine their budgets for 90 different classes,” said Bunch. “We try to get as many people scheduled as we can and that the people who need training get it.”

“She’s dedicated, she understands the needs of the folks that work around her as a team,” said Skinner. “She comes to work with the right attitude for now 50 years. What more could we want to help achieve the success that we have?”

— Scott Air Base training manager honored for 50 years of service —