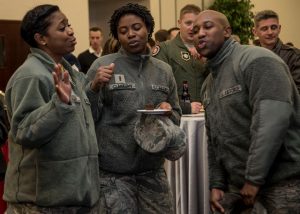 In Illinois, 2017 will be the “Year of Scott Air Force Base,” according to a proclamation issued last month by Gov. Bruce Rauner.

Rauner joined Lt. Governor Evelyn Sanguinetti and a host of military leaders and local dignitaries to unveil the proclamation during a Scott Air Force Base Centennial Celebration kick-off ceremony, Jan. 6 on the sprawling air base near Belleville.

“Tora, Tora, Tora” — a spectacular World War II aerial attack reenactment — as well as other precision flight and aircraft demonstrations are also on the air show program.  A variety of additional events have been scheduled throughout the year.

“A Century of Service” is the theme for the year-long celebration, which officials say will spotlight the base’s “heritage, mission, and partnerships.”

Quietly, Metro-East business and political leaders are hopeful those partnerships will lead to an expansion of base activities that will make Scott AFB’s second century even more important than its first to both the national defense and the regional economy.

“Scott Air Force Base has been a cornerstone of America’s defense and today oversees major transportation for our service members whether for national defense, peacekeeping or for humanitarian operations,” said Belleville Mayor Mark Eckert, during the kick-off ceremony.

It also represents a primary economic base for much of neighboring Belleville, O’Fallon, and Shiloh. The largest employer in Metro-East and the sixth largest in the Greater St. Louis region, the base currently employs 13,000 people, 5,100 civilians, with 5,500 active-duty Air Force and an additional 2,400 Air National Guard and Reserve personnel.

One of the relatively few Air Forces bases to serve as home to multiple major commands, Scott Air Force Base is the headquarters of the U.S. Transportation Command, the unified combatant command that coordinates transportation across all the nation’s military services.

Established by the U.S. Army Air Service in 1917, then-Scott Air Base originally served as a pilot training field. 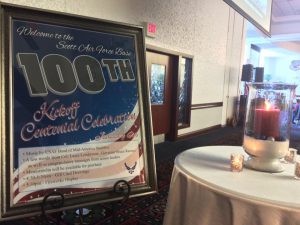 By 1921, “Scott Field” became a balloon and dirigible station

The War Department (today, the U.S. Department of Defense) originally planned to establish Scott as the headquarters for the entire U.S. Air Force, when it was spun off from the Army as a separate branch of service in 1947.

However, with the outbreak of World War II, military leaders opted to keep air operations headquartered at Langley Field, Va.; converting Scott Field to a communications training center that had graduated more than 150,000 radio operators and maintenance personnel by 1959.

In June 2014, the Air Force announced the addition of two new cybersecurity squadrons to the three already on Scott AFB,  launching what many local leaders believe will be an important new era for the base in a new world of cyber warfare.

Publicly, groups like the Belle-Scott Association of base officials and local business people, say Scott AFB begins it second century amid some uncertainty with Congress planning a new round of military base closings around the nation.

However, off the record, some say the nation’s next round of military consolidation might well result in additional units coming to Scott, which they believe is rapidly becoming a major cyber security installation. 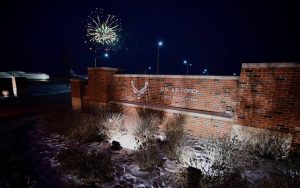 Metro-East leaders continue to express disappointment that the National Geospacial Intelligence Agency last year did not select a site adjacent to Scott AFB for its NextNGAWest campus; opting instead for a site just north of Downtown St. Louis.

However, some now believe that will ultimately result in Scott expanding some operations west of the Mississippi River

On the day of the Scott AFB Centennial kick-off, the U.S. Air Force — rather than the NGA — executed a contract with the City of St. Louis for the purchase of the NextNGAWest site.