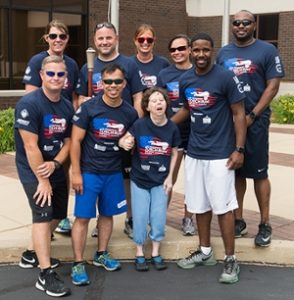 Torch RunSweating from the heat, stimulated from the run and exhilarated about the cause, eight Southern Illinois University Edwardsville Police personnel ended their three-mile run June 11 at the University’s Cougar statue on campus, marking their annual Law Enforcement Torch Run® to benefit Special Olympics Illinois.

The annual intrastate relay’s purpose is to raise money and gain awareness for athletes who participate in Special Olympics Illinois.

“For more than 20 years, we have participated in the Torch Run,” said SIUE Police Chief Kevin Schmoll. “The Special Olympics is an important and worthy cause, and we are more than happy to be able to contribute our time and efforts in support of a great organization.”

The Torch Run is a great physical way to gain awareness and show support from the Law Enforcement community to the Special Olympic athletes and their families, according to Pont.

“My uncle is a Special Olympics athlete and loves to participate in all sports that are offered, but he really enjoys track and field, bowling and bocce ball,” continued Pont.

“We look forward to the Torch Run every year,” said Johnson, coordinator of the event. “Our department participates in events throughout the entire year to benefit Special Olympics.”

This year’s Torch Run concluded June 15 in Bloomington, where more than 500 police officers from across the state marked the beginning of the Illinois Special Olympic summer games.