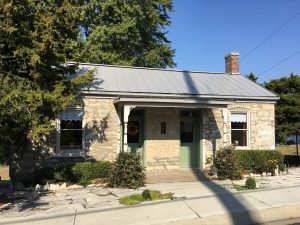 Frederick Weistar House, known locally in Chester as the Stone Cottage, has been added to the National Register of Historic Places. (Photo courtesy of Wikimedia)

Spring will see some long-planned tourism, parks and recreation projects taking shape across Metro East. However, some are proceeding more quickly than others.

For the third time in three years, legislation to help preserve U.S. Route 66 is pending before the U.S. Senate.

The National Historic Route 66 Federation, the Route 66 Association of Illinois, and other preservationists are hoping to see enactment in time to hold a planned, federally endorsed 100th anniversary celebration for “America’s Mother Road in 2026.

The bill was officially received in the U.S. Senate, the following day and referred to the Committee on Environment and Public Works.

However, a Senate committee hearing on the bill has yet to be scheduled.

If enacted, the bill would establish the Route 66 Centennial Commission, to honor Route 66 on its centennial anniversary.  It would also direct the U.S. Department of Transportation to prepare a plan for preservation of the historic roadway. The commission would complete its work no later than June 30, 2027.

Introduced by Rep. Davis on Jan. 3, the bill sped through the House with relative ease, after being approved by the House Transportation and Infrastructure Committee. Rep. Davis is the ranking GOP member on the committee. The bill attracted 13 co-sponsors.

However, it was not the first time the House has passed legislation to help preserve the roadway.

The bill approved by the House last month was essentially the same legislation — with the same name and bill, number — introduced by Rep. Davis on Jan. 3, 2017 and passed by Congress on a voice vote on July 16, 2017.

That bill was received by the Senate on July 17, 2017 and referred to the Committee on Environment and Public Works — where it died.

It would amend the National Trails System Act to create a Route 66 National Historic Trail.

Some Route 66 boosters are hoping preservation work for the highway might be incorporated into a much-anticipated major federal infrastructure bill, which has been talked about in Washington for some time. 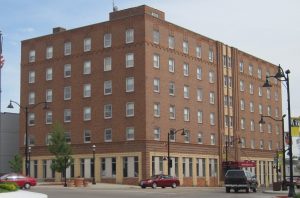 Hotel Belleville, built in 1930-31, is considered Belleville’s first “modern” hotel. It is now on the National Register of Historic Places. (Photo courtesy of Belleville Historical Society)

Meanwhile five Metro East-area sites have been named National Historic Places over the past year, according to a Feb. 11 announcement from the Illinois Department of Natural Resources (IDNR).

The sites — in Belleville, Glen Carbon and Randolph County — are among 30 Illinois properties added to the National Register of Historic Places over the past year.

Hotel Belleville (constructed in 1930-31) was Belleville’s first “modern” hotel and a fixture in business community for three decades, according to the IDNR

The Glen Carbon Village Hall and Firehouse (1910) was village’s first purpose-built government building; known for a clarion fire bell heard throughout the area.

Chester’s Christian F. Weinrich House (circa 1873) is an important example of a Folk Victorian dwelling with Gothic Revival influences, according to the IDNR.

Chester’s Frederick Weistar House, locally known as the Stone Cottage, is an architecturally significant example of a mid-19th century two-door facade building type, according to the IDNR.

The National Register of Historic Places is the nation’s official list of properties that merit special attention and preservation.

In Illinois, places are added to the register by the National Park Service based on recommendations from the State Historic Preservation Office, a division of the IDNR; generally reflecting the work of historic preservation advocates to preserve and promote the state’s heritage.

In general, properties must be more than 50 years old to be eligible for the National Register. A listing places no obligations on private property owners but does make properties eligible for some financial incentives.

Illinois has 2,800 properties on the National Register and at least one in every county.

Aerie’s Resort in Grafton, which already bills itself as the “Best View in the Midwest”, offered an advance look at its new Grafton Sky Tour, during a special tour of the mountain-side lodge and winery Feb. 12.

The fixed-grip chondola ride, down the wooded slopes along the Mississippi River, will be the only one of its type in the Midwest and only the second in North America, according to SkyTrans, which builds the rides and SkyFair, which will operate it under contract with Aerie’s. The resort already operates a popular zip line on its grounds. The Sky Tour is expected to open Memorial Day weekend and remain open year around. 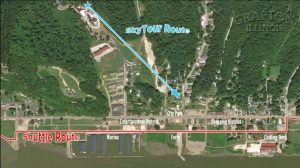 Grafton officials believe the Sky Tour will spur their burgeoning regional tourist mecca to its best season yet. The town of 675 already sees more than 1.5 million cars pass through along the Great River Road each year; attracted by Grafton River Adventures’ 49-passenger excursion boat, Big Muddy river paddling adventures, and growing array of restaurants and wineries.

A new shuttle bus services, running the length of the Grafton tourist district along the River Road, is also set to debut this Spring.

At least four new or updated municipal parks are on-tap this year in Metro East communities.

Residents of Columbia will get a new city park and those in Collinsville will see a park renovated; thanks to a pair of $400,000 Open Space Land Acquisition and Development (OSLAD) grants, announced this month by the Illinois Department of Natural Resources (IDNR).

Plans for Columbia’s new Creekside Park, located off Rueck Road, include more than 4,000 feet of shared use trails. A playground and, perhaps, pavilions will be added in the future, city officials say. Officials have long hoped to develop the tract as a recreational area to serve one of the fastest growing areas of the city.

The city’s new Glidden Park Revival Development will be guided in part by a survey conducted by the Collinsville Parks and Recreation Department last summer.

On the outskirt of the Metro East area, the City of Bunker Hill is receiving a $199,400 OSLAD grant for completion of its of Mae Meissner Whitaker Park. First proposed in 1999 to provide the town its first true community part, the 20-acre park, on the north edge of Bunker Hill by Ill. Rt. 159, already includes three lighted softball diamonds, a pond and other amenities.

Park development has been made possible by a previous OSLAD grant and funding from St. Louis’ Whitaker Foundation, which has founded by Bunker Hill native Mae Meissner Whitaker.

The Edwardsville City Council gave a final go-ahead for the park project, Feb. 5. Construction is to begin in mid-March with completion by autumn, weather permitting.

While widely anticipated by many area residents, the Edwardsville park project has also become perhaps the area’s most controversial, due to cost.  Byrne & Jones Construction was awarded a $12.8 million contract for the bulk of the park at his month’s council meeting.

Donations from individuals, businesses and organizations to help defray costs are sought though www.betterplacetoplay.com or contact the Edwardsville Community Foundation at www.edwardsvillecommunityfoundation.org.

All donations are tax deductible to the extent of the law through the foundation. Naming rights for park facilities are available.